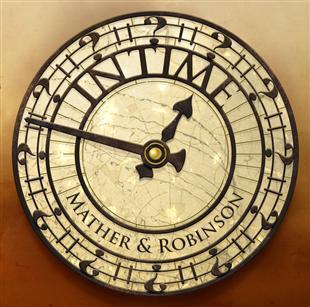 Mather & Robinson are Dave Mather of the Houghton Weavers and long-term collaborator Pete Robinson, recently involved in the modern opera The Ring of Stones. Their album In Time is so named as the collection of original songs are arranged in chronological order, beginning with the battle of Agincourt (1415) and running through to a tale of present day pub life.

Through the album, nautical and war tales are prominent. The opening tracks Agincourt and Armada are performed in a sparse and effective style and really do sound as if they are songs of some antiquity, despite being original compositions.

In contrast, the Carpenter’s Apprentice, firmly rooted in the ’goes to sea and has an adventure’ school of songwriting switches into a dramatic prog rock style a little reminiscent of Jeff Wayne’s War of the Worlds, and clearly influenced by Robinson’s operatic background. This is a highly entertaining piece of music and features some excellent songwriting.

Similarly lively isFlash Hard, an affectionate description of cricket, rooted in the expression, ’if you must flash, flash hard’.

Born and Bred describes a business partnership on the banks of the River Mersey while The Temp is an interesting poke at 1970s social mores.

War themes are revisited again in The Long Goodnight while The Whippersnapper is an original and rather cutting piece about being ambushed in the pub by a campaigner.

We return to the modern day in the final track Gambling and Drinking, which is firmly rooted in the local alehouse.

In Time contains entirely original material with a wide variety of tone and theme, from tracks that have the sound and authenticity of unearthed treasures to more expansive rock-opera. Fascinating and entertaining throughout.