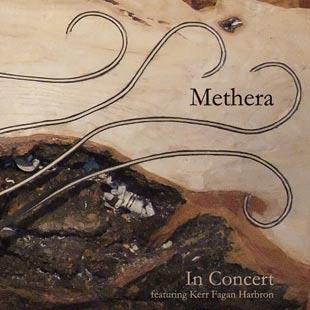 Compiled using recordings taken from their recent live tour, ’In Concert’ is Methera’s second album. Joined by numerous collaborators on their tour, ranging from the Northern Sinfoia to Karen Tweed & Roger Wilson, ’In Concert’ also features their collaboration with Kerr Fagan Harbron.

Combining elements of classical chamber music with their rich knowledge of the folk genre, this string quartet is forging a new musical path for themselves within the British traditional music scene.

’Three Galleys’ - featuring Nancy Kerr, James Fagan and Robert Harbron - is the sole song on the album. With three extra instrumental lines added to the rich quartet sound, the combined strings provide a driving accompaniment for Kerr Fagan Harbron to take centre stage and tell the tale of the Three Galleys. The conclusion is a musical delight. With seven musicians on stage the resulting sound is massive, and it’s easy to understand why the assembled audience bursts into rapturous applause as the final note is played.

The simply but accurately named ’Fiddle Jigs’ does exactly what it says on the tin - and to great effect. With their toe-tappingly infectious rhythms the fiddles and viola weave in and out of each other, as if the various countermelodies are dancing to their own tune.

’Old Tricks/ Wittenham Clumps’ is one of the many original compositions on the album and the two tunes really allow Methera to let rip.

Described by the band as “a bit of mad technical fun”, ’Old Tricks’ has the quartet playing in unison for the first half of the tune, before letting each instrumental line wander off to explore the musical landscape. The result is a highly complex and immediately catchy tune which encapsulates the whole concept which underpins Methera as a group - that the string quartet as an ensemble does not have to be confined to the ’classical’ sphere.

’In Concert’ is an enigmatic album - a live record but with the sound quality of a studio album. The resulting CD is an absolute delight to listen to and not only marks the four piece out as a highly proficient and engaging live but also one to definitely look out for.