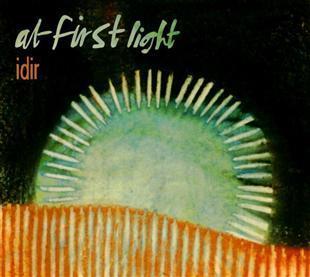 At First Light’s latest studio album, Idir, is full of the Celtic instrumental happiness that’s impossible to not enjoy. It’s also impossible to listen to it while resisting the urge to dance along to pretty much everything on the album.
Idir showcases the talents of John Sherry (uileann pipes & whistles), Dónal O’Connor (fiddle and piano), and Francis Mcllduff (uileann pipes, whistles and percussion), who are joined by various guest musicians who add guitar/bouzouki and voice.

And they’re all very good at it. The tunes are all played wonderfully, with the band evidently enjoying themselves, and the guitar/bouzouki accompaniments are the right sort - not enough to overpower the tunes that the whistles/pipes/fiddles are playing but certainly interesting enough such that your ear can happily focus on them and not become bored.

There’s only one problem, and it’s the group’s strange knack for choosing songs for the various tune sets that don’t really seem to go well together. On Rolling in Rosemount for example, the second tune is radically different from the ones before and after it - the full band goes down to just whistle and guitar with a different style of tune, then goes back to the full band with a more upbeat tune like the first.

It happens in other sets as well, and although they’re all nice tunes individually the sudden change of pace in the same set is almost guaranteed to make you do a double take, while your brain tries to work out what actually just happened. Ar Thóir an Donn is another prime example of a sudden change of pace without a lead in. What’s really strange is how it doesn’t always happen; In El Carrotin, the band go from a jig to a reel and the transition is wonderfully smooth and barely noticeable.

There’s also two tracks with Ciara McCrickard singing: A haunting ballad by the name of Aird Uí Chuain, and the traditional love song Courting is a Pleasure. Ciara’s voice is quite possibly one of the best young voices that you can hear, certainly from Ireland. The arrangements revolve around her voice being accompanied by a gentle piano part, and it’s perfect for her - there’s a lot of space for her to do things with but she instead just keeps it quite simple and controlled.

And when she does do something with it, it’s even better to listen to. Her vocal embellishments are so clean and clear it’s almost untrue, and it’s a style that’s certainly worth stealing by anyone who wants to learn how to make a song more interesting without going over the top.

Even with the strange set transitions, it’s a brilliant album which is impossible to not recommend. You might end up doing the odd double take because of them, but it’s worth listening to this album for Ciara’s songs alone, and the instrumentals are also worth it. This is an album that’s not worth missing.

Released on Proper Music Records on 1st May 2012