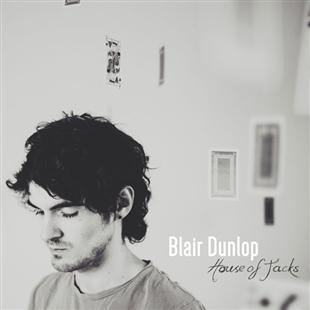 House Of Jacks arrives as a highly anticipated follow up to 2012’s Bright & Blossom - the excellent debut from 2013 Folk Awards Horizon winner Blair Dunlop. Added to the fact that former Fairporter and Albion Band legend Ashley Hutchings is his dad means there’s no pressure at all…

Well, to cut to the chase, let’s get the superlatives out of the way straight off and set to record that House Of Jacks not only lives up to the promise of Bright & Blossom, but shows that debut not to be a flash in the pan; the spark has certainly caught light and resulted in a record of impressive proportions.

Like his peer, Luke Jackson with his terrific Fumes & Faith album, 2014 looks like it will be the year when the promising young pretenders have stepped up to the mark and raised the bar spectacularly high.

There are a few tracks which on first listen have that feel of being set to be classics - the first single, and opening track Something’s Gonna Give Way, has that immediacy of being an impressive lead in to the album with its guitar and fiddle enhanced tale delivered in a pacey narrative - a modern day Dylan-like story of intolerance and prejudice with a music video to match. It’s a contemporary take on the standard subject matter of folk songs since the year dot.

Fifty Shades Of Blue and House Of Jacks share that similarly positive first impression, however, it’s The Station, discreetly buried towards the end of the album, which is a slow burner destined to gain major status on increased listens; similar to his debut album in its low key backing, some beautifully picked tumbling guitar notes and a soft shuffling rhythm accompany a thoughtful lyric on the journey of life (“twenty years have flashed before my eyes”) inspired by Robert J Hasting’s poem of the same name and well worth investing some time in reading.

The two 45s tracks (c69 and c14) compare and contrast the nature of clubbing in Soho - prince and pauper existing side by side back in 1969 where the modern take, accompanied by a clean Knopfler-esque guitar, has the corporate VIP and big egos at its heart.

There’s even a nod to Blair’s love of football with the noble game and his love of Spurs and the Italian club Fiorentina providing the inspiration and brief diversion to the guitar instrumental of Viola’s Reverie leading into the fictional tale of a young Italian player in The Ballad Of Enzo Laviano - its mood being most reminiscent of a Morricone soundtracked Western.

The promise of the songwriting, guitar playing and that clarity of voice which made their bow on Bright & Blossom are much more mature, confident and fully realised on an album which is bound to have fellow scribes waxing lyrical.

Only on the gorgeous album closer, the philosophical Song Of Two Bridges (written by Ashley Hutchings and Ken Nicol) does Blair forgo songwriting credits and once again full marks to producer Mark Hutchinson who’s at the helm again and with Blair, seem to be setting themselves up as quite an established dream team. In a nutshell, fans can breathe easy - the future of folk is in safe hands.

Released on 26th May 2014 on Rooksmere Records.