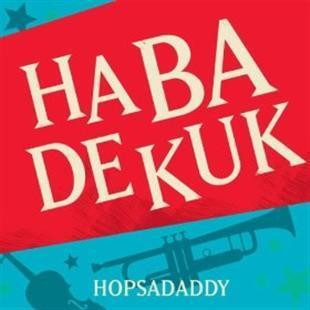 Habadekuk describe themselves as a party band, and the combination of nine Danes on saxophone, trombone, trumpet, guitar, keyboards, double bass, drums, accordion and violin certainly lives up to that description. But how else to describe them? That is a conundrum...

Habadekuk are a purely instrumental band (apart from the occasional bit of yodelling) but carry off tunes with aplomb and variety that can often be lacking where vocals are absent. It would be very easy to fall into superlatives with the unbridled enjoyment these chaps convey.

It would also be easy to compare them to bands like Bellowhead (for size and instrumental variety) or Brass Monkey. But again, that misses the point that Habadekuk are a phenomena of themselves and bring something different again to the folk music scene.

Hopsadaddy was recorded in 2010, but is now being released for the UK market, and with the current demand for exciting folk dance bands this looks like a very shrewd move.

The tunes are generally upbeat, as is to be expected. To British ears the Danish folk tunes they play sound at times like fast Irish or Scottish reels, and at others carry a more Scandinavian/Euro or even Middle Eastern feel. In fact, within a single track we can hear all of that, fused together and seguing divinely.

It is clear that being in Habadekuk is a lot of fun, but we must not lose sight of the great arrangements and ensemble playing that is going on at the same time. In particular Hornpiben is a crazy piece that whips along apace, but never leaves the listener behind: instead they are jiggling madly in their seat!

One slower moment is Viggo Post, a melody that has been popular in Denmark and Sweden, and can de danced to with a stiff leg "as if the person is digging peat with one foot and cutting heather with the other".

Hopsadaddy is a thoroughly enjoying diversion from start to finish, and definitely not an album that can be listened to passively. It is a guaranteed toe-tapper, and recommended motivational listening.