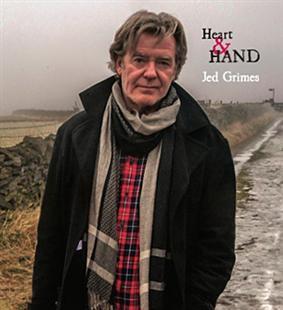 Almost 10 years since the release of his last solo album Head On, Jed Grimes makes an impressive return to the folk scene with Heart and Hand.

He shares with us a primarily traditional collection of songs hailing from both the British Isles and America. A vast musical landscape is covered and the result is an album brimming with an array of themes and sounds.

Jed is a fine musician and the album showcases him as a talented acoustic, electric and lap steel guitarist and bozouki player. His vocals - rich and powerful - lift each song and the character and passion he performs with complements the exciting layers of instrumentals and harmonies.

The album opens with Jed’s own interpretation of well-loved Byker Hill. A multitude of versions and recordings exist but Heart and Hand treats us to its latest reinvention. Already a hearty song, the addition of stunning vocal arrangements and accompaniments - including great uillean pipes - makes it a track with real gusto and energy.

Jed’s individual visions for each song make for an exciting album. He seeks to adopt styles and effects one would normally associate with such genres as the blues, jazz, rock and country. His 1950’s take on The Bold Fisherman just goes to show how folk lends itself to being shaken up a little. The creativity and originality here is marvellous and the overall result will certainly have listeners ’doo-wop-ing’ along.

However, the themes handled throughout the album forbid it from straying too far from its roots. Listeners can expect a night-visiting song as well as the odd murder and adventure on the high seas. Both lyrics and arrangements have great depth to them and thus make for a satisfying listen.

For listeners who have been waiting patiently for Jed’s next project, Heart and Hand certainly won’t disappoint and for everybody else, it’s folk with a twist here to delight audiences young and old.