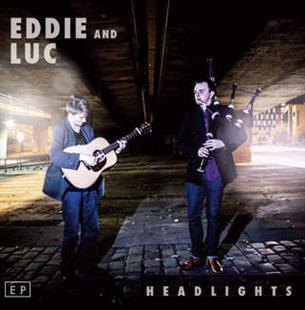 If it’s interesting to see musicians who have worked together before come together in ’supergroups’, the same can be said of two members of a fast-rising band making an EP together as a side-project.

The duo in question are Eddie Seaman and Luc McNally, normally one-third of young and acclaimed Glasgow band Barluath. Coming from the Royal Conservatoire of Scotland, Headlights features five tune sets (plus a song for good measure) on pipes and whistles (Seaman) and guitar (McNally).

Seaman’s playing has a pleasant lilt that avoids burying the melodies beneath too many extra ’ornamental’ notes, allowing the tune to do the talking.

This is particularly true of Invergordon Distillery. An elegant strathspey given a restrained treatment, the considered choice of chords and changes of texture nicely builds the sense of anticipation through the track.

Other sets, such as the muscular Dolina Mackay, see a more vigorous approach taken, with changes of tempo and timing well executed in comparison to the disjointed effect when many others do the same.

Whilst the guitar provides a solid backing throughout, there is just enough variation in the exact way the job is sliced to stop the arrangements sounding too much like a two man pub session. Similarly, McNally shows a good ear for the tune in chord progressions, particularly on I Have It Here Somewhere, the last tune in Exercise.

With that musical yet unfussy style, Headlights proves to be a spot of moonlighting well worth slinking off on.