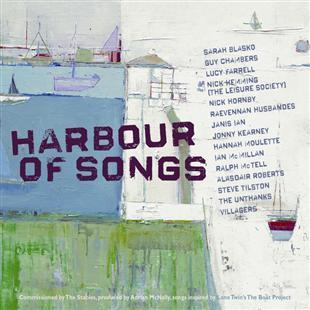 Harbour of Songs is a creative collection of works by diverse artists, produced by Adrian McNally, pianist, arranger and producer with The Unthanks. IF:2012’s Artist in Residence, McNally was commissioned by The Stables in Wavendon near Milton Keynes, to produce a unique album inspired by the evocative stories behind the wood donated by the public for the Lone Twin Boat Project - a 30-foot sailing boat built for the London 2012 Cultural Olympiad.

Every picture tells a story is a well-known maxim and one that rings true. An apt description for Harbour of Songs might be: Every piece of wood tells a story - listen.

The album reflects its title well. You feel like you’re in a sheltered harbour, casting your eye over a variety of small boats. Each boat, when observed with care, yields its own style and story. One might be moored next to another, and yet each is its own world.

The songs are as diverse as the musicians. Each song offers entry into a different world.

The first track, House Of Wood by Raevennan Husbandes, opens with the question, ’Can you build a house of wood? Some wings so I can fly?’ It sets up the dreamy atmosphere of Harbour of Songs well. Husbandes is accompanied by plaintive acoustic guitar. The pureness of her voice, simple melody and enquiring vocals draw the listener in.

This song is followed by White Fish Authority by Nick Hemming, which provides a suitable contrast. Its pace conveys a feeling of waters gently lapping.

Next comes The Ruler by Nick Hornby and The Unthanks, the story of a head teacher who abused children in school. Sung in a haunting, ghostly style, bringing male and female voices together in unison, the lyrics are chilling: ’I still remember how you used to beat us for something, nothing, for fun’. The song captures the achievement of the victims in overcoming their persecutor and escaping. ’Inch by inch we climbed above you/Inch by inch we sailed away/Headed for places where we could forget you/You and the poison of our school days.’

To follow, Jonny Kearney sings Dressing Up, continuing with the album’s cohesive theme of inner fears and hopes, the desire to escape the fears and realise the hopes.

Alasdair Roberts’ My Rola-Bola Board is a charming song about an Australian circus performer, accompanied by guitar, fiddle and harmonica.

Next comes Carved In Two by Lucy Farrell, gentle and meditative. Steve Tilston’s Sail on By is a more rousing song accompanied by piano and guitar.

Then it’s back to the circus with Pampelmüsse & The Conjuror’s Stool, performed delightfully and jauntily by Hannah Moulette. She perfects her precise delivery, with slight shades of Queen. The song opens with a link phrase: ’One song leads to another, and when the tale is over another one begins’, sung in a style reminiscent of Enya. Another apt description of the experience of the album.

Delayed Reaction by the Villagers has an American 60s feel to it. Sarah Blasko’s Simple Wooden Box is another gentle lyric. Janis Ian’s The Tiny Mouse is the story of a mouse who stows away on a ship, and has the feel of a music hall song.

The final piece, Shed Song by Ralph McTell, is a monument to a man’s shed as his refuge. Sung with emotion and supported by keyboard and brass, it has the feel of a hymn and brings an air of ending to Harbour of Songs. At the end, the shed is left with just three planks - ’one for him and one for me and one for lives and schemes that overlap each history aboard this Ship of Dreams’.