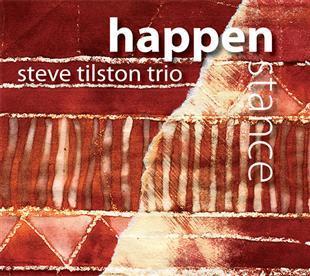 Steve Tilston needs little introduction. Well-known in any folk household, he has been an active contributor to the British folk scene for over 40 years.

A gifted and insightful songwriter with an extraordinary guitar ability and voice, Tilston’s own songs tend to give colourful and thoughtful depictions of life. Most songs on Happenstance have been written or arranged by Tilston himself.

Released on his own label, Hubris Records, Happenstance is the result of the union of three long-time friends. Since the 1970s, Tilston has played with each of his fellow band members Warmington and Gordon separately, but until now not together. What had originally been intended to be one gig in Bath and then a live album recording turned into a UK tour and studio album recording, as the trio realised the potential of their musicianship.

Beulah Road is a jolly and uplifting song about the joys of travelling on country roads. Catchy and warm, this song strongly features the violin and guitar to complement Tilston’s vocals.

Similar is the gutsy and energetic Far Side Of The World; this strong and emphatic song is centred around the art of sailing and laments for a loved one left behind. This song features lovely vocal harmonies by Warmington.

Re-arranged and doubled in length from the original 1995 lament about the northern winter, Blues For The North Wind is a soft and flowing song, given an emotive tug by the harmonica. This is complemented by Courting Is a Pleasure, a lilting and sweet arrangement of a traditional song about the pitfalls of courting.

Songs Of The Wandering Aengus boasts a clever interpretation of Yeat’s 1899 poem. Here, Tilston has skilfully weaved an entrancing melody that celebrates Yeat’s words without drowning them with complex musical lines. This is arguably the best musical arrangement of the poem, and stands out as one of the gems of Happenstance.

Additionally, Sometimes In This Life is another re-worked song from one of Tilstons’s previous albums. The new arrangement has given this tune a new lease of life, with great vocal harmonies. Lyrically, this song represents the album in its depiction of the ’big happenstance of life’.

Martin Said To His Man is simple and light, led by strong vocals. The style of this song is reminiscent of the 16th century Elizabethan period in which the song was originally written.

Lyrically, Jam Tomorrow runs with the contemporary theme of the lack of opportunity in society for those seeking a brighter future. Poignant and insightful, this song is likely to appeal to the younger folk enthusiasts.

Bouncy and sure to set the foot-a-tapping, the quirky song Let’s Face The Music And Dance contrasts the themes of some of the other songs on Happenstance by encouraging a celebration and appreciation for life.

Sentimental is the only song on the album composed by Warmington, about a lost love. This pensive, nostalgic and poetic song rounds the album off well by diversifying the style from previous songs. The harmonica gives extra emotional weight to this melodic song.

Written by Gordon, the full and patriotic instrumental tune Little Norris is reminiscent of a country or court dance. The layering of multiple instruments gives the tune a strong head-nodding rhythm.

The other instrumental track on the album, Jimmy’s Train, carries a strong Jazz style, featuring intricate guitar work by Tilston and harmonica by Keith.

Happenstance is a collection of diverse songs, from laments for country life to political criticism. The different sounds and emotions of each instrument weave fine stories and complement Tilston’s voice beautifully.

Well-balanced and simple yet catchy and tuneful, these songs are strongly indicative of the remarkable nature of the trio’s abilities and experience. The album cleverly unites the traditional sounds of British folk with the occasional blues and country whine and twang from the harmonica and string instruments.

Happenstance is a must-buy album for any folk enthusiast, but particularly those appreciative of more traditional styles of song. With so many different lyrical and musical themes running through the album, both to contrast and support but always complementary, this album really does have something to please everyone.