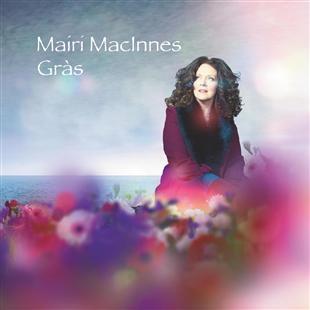 In this age of instant gratification, it’s good to have the occasional reminder that patience can be its own reward. It may have been more than ten years since Mairi MacInnes released her last recorded work, but the wait for the lovely, atmospheric Gràs has been worthwhile.

Medal-winning, native Scots Gaelic singer Mairi MacInnes has previously worked with artists including Runrig and Mouth Music. Her music is deeply rooted in the traditional Hebridean music of South Uist, yet is also inflected with some subtle touches of modernity.

The primary inspiration for the album can be found in the opening song Storm, which refers to a calamitous storm that struck South Uist in 2004 and claimed many lives, including three generations of one family. In the close-knit communities of the islands, the impact of this can only be imagined. Both Storm and title track Gràs are Mairi’s own compositions, topping and tailing the album. Gràs is an adaptation of an old Gaelic prayer and completes the cycle of life represented here, starting with the sometimes dark forces of nature, and ending on a note of dignity and hope.

Much of the rest of the album is derived from traditional words and melodies, as well as drawing on some of Mairi’s own personal experiences down the years. The album touches upon many of life’s fairly universal themes - both the good times and the bad times - as the song titles themselves indicate. The more upbeat songs reflect their themes: childhood, kin and mischief, each of which feature repeated motifs and often a gradual increase in the tempo as the song progresses.

Childhood in particular has a spinning, dancing joy - in contrast with the more wistful and sentimental Home. Reflection marries a crackly archive recording of one of Mairi’s relatives, with her own vocal accompaniment, creating an interesting composite texture that still has a naturalistic feel. Toil is a downbeat rhythmic work song, enhanced by rowing boat sound effects and a chilly wet slap of percussion.

Mairi MacInnes’s clear, pure voice is hugely expressive, the warmth of her tone and the emotions are clearly conveyed almost irrespective of whether the listener understands the language. This sensitive, reflective and tender album may have been a long time coming, but it is a pleasure to listen to now that it’s here.