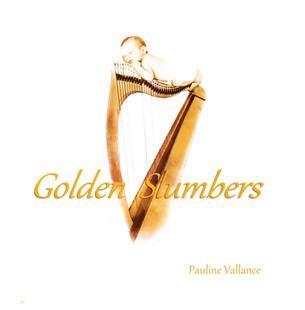 Golden Slumbers is a compilation of simple traditional Scottish lullabies by an experienced and able artist. Vallance is a fairly recent gift to the British folk scene, and with her first release Songs, Spells and Salsa Moves recently released, she is sure to leave her mark on many. Golden Slumbers incorporates Vallance’s voice, flute and clarsach (the Gaelic word for harp) all played skilfully and artfully by Vallance herself.

The album begins with its namesake, Golden Slumbers, Vallance’s colourful voice gives a soft and enchanting lilt to this lullaby, followed by Ally Bally, a plucky and endearing song with lyrics sure to bring a smile to anyone’s face, with catchy harmonies too.

Fhir a Bhata, B a l u o ho and Baloo Baleerie are all sung in Gaelic, which allows Vallance’s tight vocal harmonies to really shine with captivating melodies. Eriskay Love Lilt gives a very pleasing melody with relaxing harmonies - this song introduces the husky flute. Little Bird depicts the warmth and sentient tones of the flute to the song, and will soon have you humming along!

The Lark in The Clear Air is a popular traditional song set beautifully with Vallance’s distinctive voice and the twinkling sound of the clarsach. Smile in Your Sleep and Highland Lullaby offer lulling melodies with the clarsach complimenting Vallance’s low, lilting voice.

Hush My Baby is the only song on the album written by Vallance herself, and it is original and full of character in its presentation. In Dream Angus, the final song on the album, Vallance seems to gracefully strum the listener’s heartstrings as well as she strums her beloved clarsach.

This really is a beautifully arranged and delightful album of characterful and nostalgic song with beautiful and emotive melodies that stick. Ideal for easy listening or relaxation it would be appreciated by young and elder members of the family alike. One does not easily forget this album after listening.