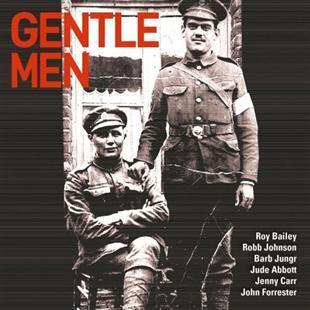 Gentle Men is the re-imagining of Robb Johnson’s original 1997 work, reflecting on the experiences of his grandfathers in the First World War. This new recording arrives just in time for the 100 year commemorations of the conflict.

Drawing on some heavyweight folk talent including Roy Bailey and Jude Abbott, Johnson’s album plays almost as a melodrama or light opera, rather than a traditional folk record. The instrumentation is light on the whole, with the voices and lyrics to the fore.

It is hard-hitting stuff in places, and Johnson doesn’t shy away from the realities of war, for both soldiers and those at home. Dead Man’s Pennies (1) and Empty Chair are both sung from the perspective of the sweetheart left at home with her hopes now dashed forever. Whilst Bloody Medals go some way to exploring the idea of survivor guilt.

But there is also a gentle thread running through some of the tracks, a lightness to counterbalance the constant weight of the war contained in these songs. Noni & The Golden Serenaders is a counterpoint both in it’s more upbeat lyrics and indeed its musical stylings. In contrast RSM Schofield is My Shepherd is not light in subject matter but is very well delivered and the use of Psalm 23 as the base is quirky and engaging.

It’s hard to pick out standout tracks on a double album with such a strong theme running through it. But, A Gentleman Always Wants Horses lilts along very nicely and An English Heaven is a wonderfully delivered song, with a surprising final verse.

There are a number of tracks which appear twice in different versions. This repetition and evolution is exciting, and also increases the poignancy of the tracks’ messages. In particular Dead Man’s Pennies appears towards the end of each part and is a wonderful song on both occasions.

This new version of Gentle Men also contains three extra new songs which were inspired by the modern deployment of young men to Afghanistan and Iraq. Some may feel these songs are out of place or more politicised, but it is interesting to consider the parallels that these songs provoke with their forebears.

Gentle Men is not an easy listen, but the musicality of the singers and the poignant content throughout are enjoyable, just don’t expect to feel upbeat afterwards.