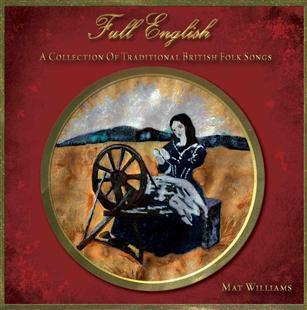 Full English is a wonderful collection of recognisable classics which have been carefully and beautifully recorded. Because they are all so familiar you don’t have to get to grips with the content so you can just sit and enjoy. Williams’ voice is very attractive, and the featured Uilleann Pipes are jolly without being over-bearingly pipe-y. It is a beautifully balanced assemblage.

Full English is a comfortable listening experience which includes exuberant choruses and peaceful ballads. It is a mix which is reminiscent of a superb pub-session. In fact one of the tracks, Derby Ram, was recorded in the Horse and Groom in Nottingham - giving a genuine atmosphere. It is energetic and lively without being exhausting.

There’s not much to say about the lyrical content of the album, as it is a CD of well-known traditional tracks - the albums foundations are grounded in the traditional songs which Williams’ mother would sing when he was a child. However despite the familiarity of their content these recordings feel fresh and revitalized.

The stand-out track is The Mermaid which is one of the bouncier tracks. It is jovially supplemented with salty cries of ahoy! and the sound of sea-gulls, evoking the ambiance of seaside pubs, a sensation further evoked by Williams’ gravelly Ronnie Drew-esque vocals. It was the only track I did not know inside out, but by the end of my first listen I could sing the chorus. The other top track is his recording of the Raggle Taggle Gypsies in which Williams creates a jaunty Balkan sound which will get the most sombre of feet tapping.

Each song is completely charming. There is a polished and reflective rendition of the Wild Rover, and a beautiful duet version of the Two Magicians - which is made into a mischievous story of playing hard to get. An interpretation of Scarborough Fair which outdoes Simon and Garfunkel’s hit by being more brooding, helping to emphasise the impossibility of the thankless lover’s tasks, and a King Henry featuring some beautifully lyrical pipes and a sound that grows through the piece demonstrating the tension of the story.

Williams’ vocals range in timbre from well-polished to gravelly and rough, and the tone of the tracks ranges from lyrical ballads to pub rounds. It is a fabulous collection, it’s not challenging, but is easy and cheerful listening.