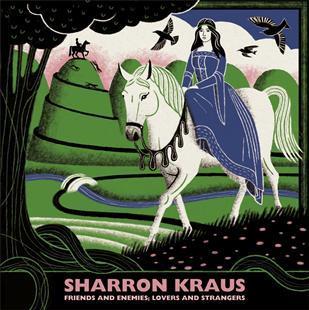 It might be obvious to state that the retelling of ancient legends and tales lies at the heart of the ballad and folksong tradition. These stories retain their power through to the present day because they speak to us about such timeless subjects as love, war, betrayal, and death.

While she was living in mid-Wales the singer, musician and songwriter Sharron Kraus fell in love with the Welsh folk tales of The Mabinogi. In order to get to grips with these strange and mysterious stories, Kraus has written a cycle of nine songs which reflect on the themes and events of these narratives.

The instrumentation is sparse. The main accompaniment to these songs is guitar (played by Krauss) plus harp (Harriet Earis) and piano (Nick Palmer). On some songs Krauss is joined by singer Nancy Wallace. An otherworldly quality is evoked by the use of recorders, bowed dulcimer and percussion, all played by Kraus herself.

The tone of the album is set by the first song, My Friend’s Enemy. Over a guitar riff Kraus sings about Pwyll, the Prince of Dyfed who has to kill a stranger to become friends with someone he insulted. The tune, which Kraus sings, is a simple one but doesn’t quite go in the direction the ear expects.

The recorder comes to the fore in The Hunter. This tells the story of Pwyll’s encounter with Rhiannon who is riding a white horse. Although she maintains a trotting pace on her steed, no matter how fast she rides, Pwyll never catches up with her. The song muses on the nature of true love and concludes that it can never be hunted or controlled.

Branwen is a powerful piece about a war between Ireland and Wales in which only fourteen people survive. The song is a melancholy one as Branwen sings of the guilt she feels at being the cause of so much death and destruction.

Not all the songs are about war. The Birds of Rhiannon tells of the sweet song sung by the eponymous birds to survivors of a great battle. Even in the darkest hour there is always hope.

Although appreciation of this album will be increased with some knowledge of the stories contained herein, the songs can be enjoyed for their purely musical virtues. Kraus knows how to write a melody and to draw one into a story. The pieces may seem simple in construction but the carefully crafted arrangements turn each song into a miniature jewel-like epic.

There is no greater example of this than the final piece, Stranger in Your Land. On the surface this song feels different to the others on this album. The use of a small organ and piano gives the song an optimistic light feel. Yet, the song is about starting again in a foreign land and extending the hand of friendship to strangers who may want to kill you. If the land you move to, Kraus asks, is hostile to you is there any chance of happiness?

Friends and Enemies; Lovers and Strangers is an album that gives up its secrets slowly. It takes a few listens to get to grips with these deceptively simple songs, but the time and effort involved is more than worth it. An album to live with and to savour.

Released on the 18 May 2015 on Clay Pipe Records on vinyl, limited to 500 numbered copies.