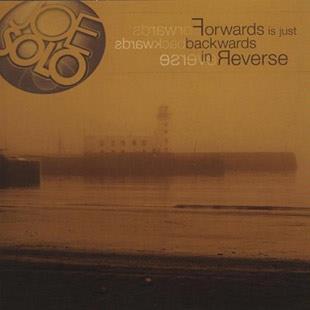 ’Forwards Is Just Backwards In Reverse’ is a new album from Scarborough-based artist Joe Solo. The style of the album is an interesting mixture of folk and blues with distinct country influences while the songs cover contemporary, historical and political themes.

The album opens with ’A worried man’, a bluesy track, driven by some fine harmonica and guitar playing. ’Asking around’ takes a swipe at everyone’s favourite villains, the bankers within a tale of industrial decline, while ’Business is Good’ is clearly influenced by the credit crunch and recession.

A more traditional note is sounded with ’Ain’t got a place’, that laments the loss of traditional trades and an entire way of life in the towns that depended on them.

Two songs are concerned with wartime, ’Old England’ is a cutting piece of politicised music, comparing the war against Hitler with the struggle against the far right today, clearly influenced by Solo’s involvement with the Folk Against Fascism movement, while ’Newfoundland Pine’ paints a vivid picture of hiding under the kitchen table as the bombs fall.

’NMN (No More War)’ has a catchy crowd pleasing chorus and a clear moral message. The best track is ’Tom Paine’s Bones’, a slow burning but powerful cry for freedom that feels like a mission statement from Joe Solo himself.

With the rest of the album written by Joe, there is one cover version, that of ’Love of the Common People’, originally by ’the Four Preps’ and most famously recorded by ’The Wilsons’. Solo’s version is much slower paced, and I think suffers a little from that in comparison to the original.

’Forwards Is Just Backwards In Reverse’ is a varied, heartfelt and personal collection of songs, falling in between the folk and blues genres.

Released by Resolve Records on 6 February 2010