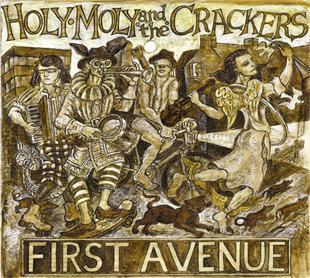 From the Bohemian Quarter of Newcastle comes the extraordinary and captivating sound of Holy Moly and the Crackers. It’s a name you can’t miss, but more importantly, it’s one you probably won’t want to. First Avenue, released on 1st October 2012 has only increased the buzz surrounding the quartet and unsurprisingly so. The album is certainly one of a kind - it’ll have you dancing along, singing along, and embracing the charm of folk-indie at its most exuberant.

The album has a somewhat carnivalesque air about it. It mixes merriment and riotous excitement with the unshakeable feeling that there is something a little more sinister lurking in the shadows. Perhaps the reason for this lies in such tracks as Devil and the Danube with the unsettling contrast between an energetic fiddle and accordion riff and a foreboding (albeit whimsical) tale of ’busking for my soul ’til judgement day.’

First Avenue fuses the talent of Conrad Bird (guitar, vocals), Ruth Patterson (fiddle, vocals, cello), Rosie Bristow (accordion, percussion) and Ash Etchells-Butler (percussion, harmonica, banjos). The enormous sound of such an impressive collection of instruments is a prominent feature throughout the album, particularly with the help of foot-stomping rhythms from the percussion section.

However, we always welcome those moments where delightful melodies on the fiddle, luscious chords and sweeping runs on the accordion, and the often intricate and delicate guitar arrangements steal a few moments of their own, demonstrating the true skill of each individual musician.

This is achieved by each instrument dipping in and out of the spotlight to give a varied and interesting backdrop to the vocal performances. The result is mesmerising and we’re constantly eager to find out from where the next flurry of notes will appear.

The album also showcases the quartet as talented songwriters and story tellers. The listener joins the group as they face adultery, whisky and beggars (the perfect recipe for a folk album) but with a refreshingly modern day slant. In tracks such as Down On Time, Ruth’s singing is soft and enchanting, her voice entwining flawlessly with Conrad’s honest and charismatic performance. Both display undeniable strength and passion which is vital for the delivery of their unique, self-penned songs.

The four musicians are stylistically dazzling and the ’circus-folk’ flavour of the album means that the group really does stand out from the crowd. Together, they blur the boundaries of folk music, engaging with a range of different genres of music such as gypsy and blues to produce a truly terrific sound.

Holy Moly and the Crackers are to be enjoyed by those curious to see what else the folk world has to offer and by those who enjoy a tantalising tale and a fairly liberated musical style. So for an explosive combination of creativity, originality and talent that’ll put a spring in your step, dig out your dancing shoes and take a trip along First Avenue.