Findlay Napier & The Bar Room Mountaineers - Out All Night 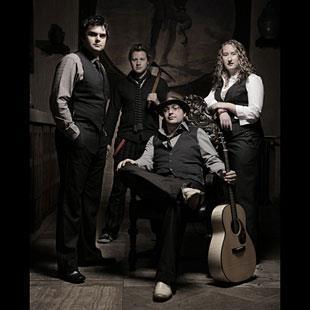 I wasn’t entirely sure what to expect from Out All Night. I knew a little bit about Findlay Napier from Back of the Moon and Last Night’s Fun, but nothing about this latest project. The press release description of the band as “Scottish Americana” conjured up some curious Celtic alt-country creation - a Scottish Wilco if you please. In practice, the comparison is a bit of an irrelevance. The music does have that gentle understated feel, but the real strength of the Mountaineers comes across in the lyrics and Findlay’s lilting vocals.

The album is largely self-penned and has a nice line in observational and confessional storytelling. The folk roots are clear, but the themes are contemporary. ’He’s such a sweetie’ is an early highlight, bitterness laced with humour in the face of losing the girl to a new man (Been there). Then comes the beautiful Mo’s All Night Café, a song which seems to ooze melancholy. Indeed, and I mean this in a good way, a gentle melancholy is the overwhelming feel of most of the album. It continues through ’Out All Night’ , ’Point of No Return’, and while ’The Note’ is musically more upbeat, it still has that feel of regret, in this case of the the womaniser facing tables turned.

Mixed in amongst the original songs are a number of traditional numbers, none of which I was familiar with, including the Battle of Corrymuckloch, the ode to the benefits of whisky, Wee Drappie O’t, and Lambkin. All of these are well-arranged, with the pick probably being Lambkin. It’s a shame though that the CD doesn’t include lyrics for these as there are times when this Sassenach was lost, and Google could only provide so much translation.

All said and done, definitely a grower, and a charming slice of sadness.