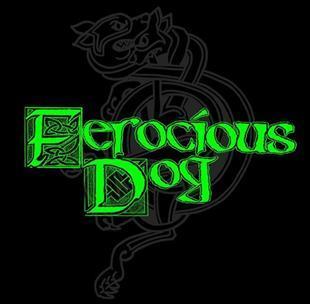 Ferocious Dog are a punk-folk outfit from Nottinghamshire and their new release Ferocious Dog is their first full-length album. It has been years in the making but it is heavily marked by personal tragedies. But, whilst often tragic in subject matter, this is still a collection of songs to get sweaty and jump around too.

It open with The Glass, a raucous number which at times moves from folk-punk to pop-punk. It is really energetic, but the instrumentation, although being based on folk instruments, completely bypasses the conventional folk sound with reverb and plenty of amplification.

The Glass is followed by Lee’s Tune, a number which opens strongly with some wonderful playing, and builds up into something more militant and musically aggressive. The musicality of this number moves back more into the folk realm.

There isn’t much tradition on Ferocious Dog, the most traditional tracks are Mairi’s Wedding Part II, Paddy On the Railway, and Verse for Lee. Paddy On the Railway is sung and played with so much gusto they might have been electrocuted. In the Case of Mairi’s Wedding the re-write of the traditional tune is less gentle and loving, and almost appears to angrily be poking fun at the folk tradition as a whole. There is nothing tender about this re-write. The same cannot be said for Verse for Lee:; lyrically it’s one of the more touching numbers on the album.

Verse for Lee is one of the only tracks where the vocals turn away from aggression and speed and slow down to a more sentimental piece. Unequivocally this is an album filled with pent up aggression and impatience. The songs reflected a disaffected view of our modern world: Mairi meets a lazy boy jack who hasn’t worked in twenty years, Hell Hounds includes the themes of prostitution, despair and the devil, and Two Times bemoans betrayal and infidelity.

Even when the tonality of the music hits a lighter note there is still a depth of despair, loss and anger in the numbers. The pop-punk sound which features in several tracks is occasionally overtaken by a ska roots-style tone, for example onPocket of Madness but even the easy going sounds can’t overcome the sense of loss and anger which pervades Ferocious Dog.

The instrumental aspect of this release is the most impressive part; they have a deep sense of urgency in their sound - the excellent mandolin on Criminal Justice for example - however in the vocals the tone seems less sincere, sometimes unmotivated and usually more aggressive. They are less telling a story and more giving a lesson which you must listen too.

There is plenty to like on this release. Emphatic energy, enthusiasm, intricacy, skill, and fight. The fast paced pedal to the metal style isn’t necessarily to everyone’s taste but there will definitely be people out there to whom this is a serious breakthrough record. But for the more homely folk fan it might be a bit too punk and not enough folk.

Self released in 2013
Produced by Gavin Monaghan and Rob Huskinson