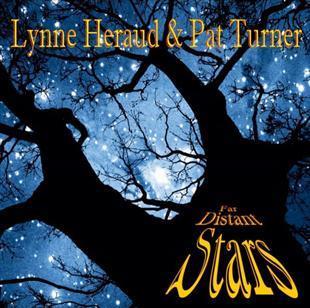 Far Distant Stars is the new album from singers and instrumentalists, Lynne Heraud (vocals, recorder) and Pat Turner (vocals, guitar, English concertina). Both are well known on the folk scene and at their respective Folk Clubs, having performed and toured both together and with their respective ensembles.

The fifteen track album offers the listener both traditional songs - such as Bold Grenadier - and self-penned compositions - such as Mr Double-Barrelled. This makes for real variety and a lively and engaging collection of songs. The duo are certainly entertaining performers and talented musicians, with superb personalities - which is very evident in their music.

The songs written by Lynne Heraud and Pat Turner themselves are charismatic, humorous and quirky. Such songs as Stress Incontinence and Secrets are not usual themes for folk music, but their jovial, comic nature is certainly to be welcomed. Despite the duo’s fondness for a spot of outrage and comedy, they are able to treat themes a little more sinister or melancholy with the same level of energy and personality - ensuring that these stories are told with real sincerity and emotion.

The duo sing mainly unaccompanied, embracing the beauty and effectiveness of using voice as the main instrument. The harmonies used are extremely striking, made possible as the two singers between them have an impressive vocal range. Each voice is highly complementary of the other, with a difference in tone between the two making for a powerful and unique sound.

The album includes songs with instrumental accompaniments, such as the gorgeous song Moth (guitar), and He Went For a Soldier (English concertina), which give the songs a slightly different feel and enables the duo to work with several layers of music, demonstrating the ease at which they can create accomplished arrangements.

Far Distant Stars: overall a lovely album with a fine collection of songs including those written by such names as Paul Davenport and Graeme Miles. It is well worth a listen for a both a good story and a good chuckle! Special mention must of course go to Trolley Dating - Lynne and Pat are certainly onto something with that one!