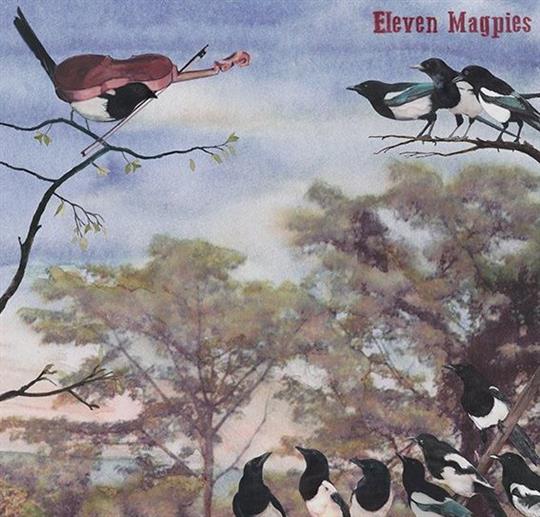 Eleven Magpies is an album of 14 instrumentals composed by Bristol-based multi-instrumentalist, Ian Ross. It’s also the name of the group of musicians performing these tracks, Ross being joined by Alex Vann (mandolin), James Gow (cello) and Elizabeth Westcott (violin).

Instrumental albums are not always universally popular in the folk world but this debut makes for a very classy product that is certainly worth exploring. The tunes on the album are said to have been inspired by Ross’s travels as a touring theatre musician, which have taken in California, Minnesota, Illinois and Somerset.

The interplay of guitar, cello, mandolin and violin really does help conjure up images of the natural world in the way that many of the titles on the album would suggest. One can almost hear the pitter patter of snowflakes on White Out, whilst Spring is Over There provides a frenetic bursting of colour in one of the liveliest tunes on the album. The quality of the musicianship is very strong and there are some lovely intricate melodies which benefit from repeat listening.

This album is a convincing debut with exemplary musicianship and some evocative tunes that allow the listener’s imagination to run away with itself. For anyone looking for something that is both intensely thought-provoking and naturally calming listening for the summer evenings ahead, then they could well find Eleven Magpies does the job they are looking for.

Self released in February 2015