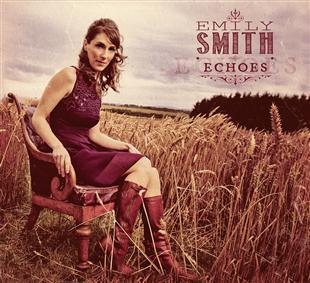 Echoes, the new and much anticipated album from Emily Smith is the fifth album from this award winning Scottish singer.

2013 saw the 10th anniversary of Emily’s folk singing career, with this in itself promising Echoes to be a remarkable and stunning addition to the collection. Her list of achievements as an accomplished and well-travelled artist to date are impressive and this ten track album is undoubtedly the work of an experienced singer who seeks out unique styles and sounds and exciting, new ideas.

Emily is joined on the album by a group of fine musicians, (usual band members: Jamie McClennan, Matheu Watson, Ross Hamilton, Signy Jakobsdottir, and special guests: Jerry Douglas, Aoife O’Donovan, Kris Drever, Tim Edey, Nataemlie Haas and Rory Butler) each bringing to the album polished, exquisite performances which seek to complement and enhance the rich and distinctive voice of Emily herself. Without detracting from the story in hand, the musicians can be heard weaving a web of melodies, harmonies and styles beneath the singing and varying from moments of single to multi-instrumental arrangements.

Whilst Emily is known for her links with traditional Scottish music, Echoes has challenged her and her musicians to broaden their musical horizons, in search of a new angle through which to present their songs and music. As such, and in line with Emily’s appearance on BBC Four’s Transatlantic Sessions, the album takes on an American twang, with both song and accompaniments perfectly at home in both Emily’s home of Dumfries and Galloway and world-renowned ’Music City’ - Tennessee’s Nashville.

Most of the singing is, of course led by Emily with her voice - powerful yet often breathtakingly delicate - conveying tales to the listener with real beauty and honesty. However, a few tracks, including The Final Trawl and Twa Sisters, see her joined by gorgeous vocal harmonies which, due to the distinguishing sounds produced, confirm the album as one pioneering the ’new Scottish Sound.’

Echoes celebrates Emily’s passion for traditional song and her ability to inject into each, a certain personal touch, emotional connection and depth which leaves the listener hanging on to every word.

The album seems to pay particular attention to the relationship between layers of instruments, voice and harmonies and the flawless and engaging presentation of traditional song. As such, character and energy is often varied through instruments and voices dropping in and out - as appropriate to mirror the feel of each song - rather than speed and dynamics. Nevertheless the result is ten tracks of mesmerising material.

The numerous awards associated with Emily’s name are enough of a clue to suggest that Echoes is a welcome addition to her previous works. With a fresh outlook on traditional singing and the links made between countries, Emily’s slick and elegant delivery of songs makes this album a must listen.