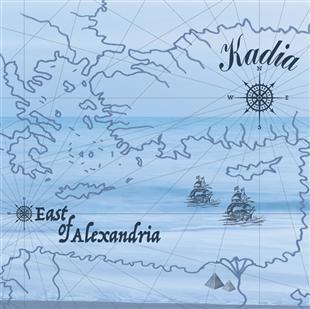 A guitarist, a cellist and a ukulele player-stroke-drummer walk into a folk club. On paper, it sounds more like the set up of a bad musician’s joke than a workable band.

In Bournemouth though, it’s a real life trio called Kadia (pronounced kay-dee-ah). East Of Alexandria is their debut full release, and if the lineup is unorthodox, it gels together surprisingly well.

With each of the trio also chipping in on vocals, the album mixes traditional songs with original numbers influenced by them to varying degrees.

The opening track is a gypsy jazz reworking of Raggle Taggle Gypsies, which is surely a first. Similarly novel are the verses of Mary In The Silvery Tide, where the guitar and vocals seem to float over a shuffling drum pattern that skips a beat every so often.

Unfortunately, the same doesn’t quite go for The Beast Of Bodmin Moor and My Friend, which by using archaic turns of phrase in the lyrics (“take heed, and listen close my friend...”) stray a bit closer to the cliché of English folk song than the real thing.

Less ’folky’, but much more enjoyable are The Navigator and Silver Linings, two lovesongs that are heartfelt in the best sense of the word. With a restrained accompaniment, Lee Cuff’s cello playing comes into its own, with elegant lines that would sound naive on fiddle gaining a depth and fullness from the lower instrument.

Meanwhile on East Of Alexandria the guitar and ukulele parts lock together beguilingly to mimic the sound of the North-West African kora and the ancient music of that part of the world. Unfortunately, the spell is broken halfway through when the drums come in with a check-shirted Mumford stomp.

And although the skins get a decent battering on that track and Just As The Tide Was Flowing, in the mix as a whole they lurk under the surface, almost fighting to get out. And with vocal harmonies that choose the smooth over the angular throughout the album, one can’t help but wonder if it couldn’t do with just an element of roughness and brio somewhere along the way.

Not that a lack of abrasion should detract from the many engaging moments. And there’s certainly enough of these to make sure that next time anyone mentions that combination of instruments, they’ll know it’s not a joke.

Self-released on CD and Spotify on 20th April 2015

1. Raggle Taggle Gypsy
2. Beast of Bodmin Moor
3. Mary in the Silvery Tide
4. The Navigator
5. Origin of Fire
6. My Friend
7. The Rise and Fall of Mary Read
8. Silver Linings
9. Copper and Gold
10. Just as the Tide Was Flowing
11. East of Alexandria
12. The Parting Glass