Until The Bird... - Dwelling 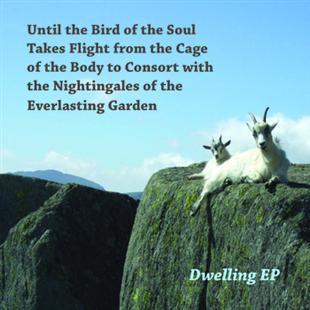 Until the Bird... of the Soul Takes Flight from the Cage of the Body to Consort with the Nightingales of the Everlasting are a new three piece that sing self penned songs, and have released the EP Dwelling.

It’s a style of songwriting and singing that would be happy in the company of Mumford and Sons. It’s full of catchy songs, offset by some great counter melodies in the instrumentation. Category Mistake is a prime example of what happens when the instruments and the voices come together to make something wonderful.

Sometimes it ends up sounding a little strange. The song Collateral starts with a barrage of ukulele and then melds into a song where the accompanying instrumentation sounds at odds with the melody, making it difficult to really hear David Hawkins singing what might be a peace song, which makes everything sound at odds with the subject matter.

The real shame is that Ruta Vitkauskaite is obviously a very talented violin player, but doesn’t really get the chance to shine. There are plenty of times when she plays virtuosic passages, but they don’t really add to the song and when she isn’t playing virtuosically , it can be hard to hear what she is playing.

The guitar playing is lovely to listen to, with a good mix of straight chordal style and picked out melodies to keep the ear listening. The playing really comes into its own on Triage, where everything is slow and there’s plenty of space in the music for interesting things to happen in response to the singing.

Thom Harmsworth does a sterling job on accordion, especially in the slower songs where the drone allows Hawkins to switch up from playing chords on the guitar to playing melodies without losing a harmonic anchor. The trombone playing adds to the song style as well, even if the song style is the strange break in genre that Triage presents. It’s certainly a refreshing experience to hear a trombone being used as a soft instrument instead of using it for a harsh attack out of nowhere.

For those who like their music traditional (be it traditional songs or just traditional sounding), then Dwelling may not appeal. But for those of a contemporary nature it grows on you, and is worth the multiple listens to really get to grips with it.

Until The Bird... discography