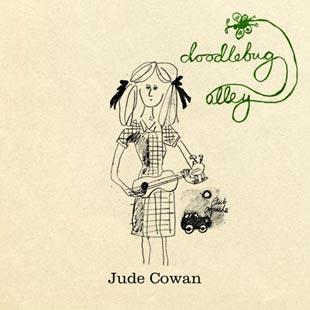 With influences ranging from traditional spirituals to poetry to tales of love set in the Blitz, I think it’s fair to say Doodlebug Alley is a mixed bag. But while I’m sure there’s something for everyone, its compilation-like qualities also give it a Marmite-like quality - you’ll either love it or hate it.

A natural musicality ties all the tracks together, with little (or no) post-production hiding the raw emotion often found in Jude’s voice. And it’s a voice which drives the album from start to finish - easily skimming over any and all accompaniment.

’Remember sinners’ is one such example. Sung in the very top range of her voice, no attempt has been made to correct the times when she doesn’t quite hit the intended note. Consequently, there is a mournful, brittle quality to the production that echoes the story, that of Francois Villon.

’She sits at the window’, on the other hand, has more akin to the opening of a radio drama or a long-lost recording found at a crucial moment in a sci-fi film than a folk song. The slightly tinny quality of the spoken word creates a sense of nostalgia, which is echoed in the melancholy piano accompaniment. And, as all good short-stories should, Jude leaves us with more questions at the end of the track than we had at the beginning.

But while I appreciate ’She sits at the window’ for its narrative, my highlight of the track has to be ’Jolly Roger’. Despite its name, the story behind the music is not of whimsical pirates, instead it is a measured look at the subject of abortion, much darker than its central tune would suggest.

There is a lot of talent behind this recording, but it seems in places that this album has multiple personalities and desperately searching for a secure identity. But unfortunately, while many of the tracks pique my interest, the lack of cohesion makes it a difficult listen.

Released in 2010. Available on import