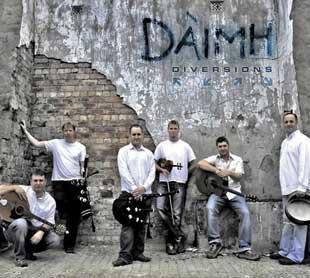 The latest album from Daimh sees the Scottish band performing Celtic tunes and Gaelic songs with aplomb. It also cements the presence of Calum Alex MacMillan as vocalist with his second album recording.

The biggest danger for me is creating my own singalong lyrics to the Gaelic, and Sporran Dhomhnaill is ripe for that, with its upbeat, catchy chorus. The song is of a man whose sporran is empty because his family spend the money and who laments for the days it could all go on drink. Calum Alex well portrays the comedic tone of this song and it is incredibly catchy - a great choice to open the album.

In contrast, Mo Mhaili Bheag Og lis the mournful tale of a soldier who accidentally kills his love. The deep pathos comes across through the music and vocals really well and causes the listener to give pause.

The sleeve notes are invaluable to me when listening to lyrics in another language, and Daimh have an excellent and novel system of using pictograms to indicated levels of love, death and drink in each song.

The album also contains a number of exciting tune sets, in particular Lock and Load. The band are very tight as an ensemble and the arrangements and performance sound effortless in both the playing and the transitioning between tunes and instruments.

Taighean Geala features some great bodhran work and epitomises the proud Gaelic nature of Daimh with some handy pipe work and the use of a strathspey in the set, a most Scottish tune form.

In their tunes Daimh are not dissimilar to Breabach, a comparison to be expected in two Scottish purveyors of thumping good tunes. However, the two bands do differ, with only fast Scottish sets and pipes bringing them together.

Daimh are steeped in Gaelic heritage. Their beautiful songs and tune sets create an album of shades, mixing the upbeat with the poignant. Diversions is a truly Scottish album musically and in the stories it tells.