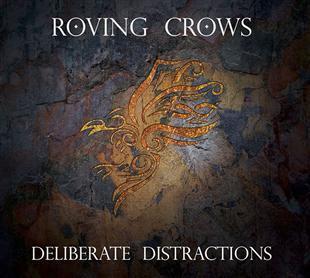 The Roving Crows are known for their more mystical use of sounds to build up a varied atmosphere in their music. Their latest full album release Deliberate Distractions is no exception.

The opening track Journeyman’s Blues kicks off with an odd start before exploding into a full, exciting track of fiddle, brass and guitars. It sounds like an interesting merger of folk, bluegrass and jazz.

The use of brass is a nice addition from their previous self-titled EP, and their vocals have changed too, sounding more American. It is a nice change and becomes most prominent in tracks such as The Hitchhiker and Big Man.

Even with some of the more brass-based tracks that deliver excitement and an element of foot tapping into their music, the band have still retained one of their more mysterious tracks, Weather which was on the EP. The use of this previous track on the album is interesting as it changes the dynamics of the album.

In contrast to both the brass and mysterious tracks we get some soft tunes too. One Day consists of a gentle guitar strum and violin, while the lead vocals tell a soothing story to the listeners. This is another distinct style on the album, providing us with lots of variety and elements that will be enjoyed by different people.

What is particularly interesting is how some of the tracks, such as God on Demand make use of all three of these separate styles in one go.

A very entertaining and exciting album, soothing and foot tapping, often at the same time!