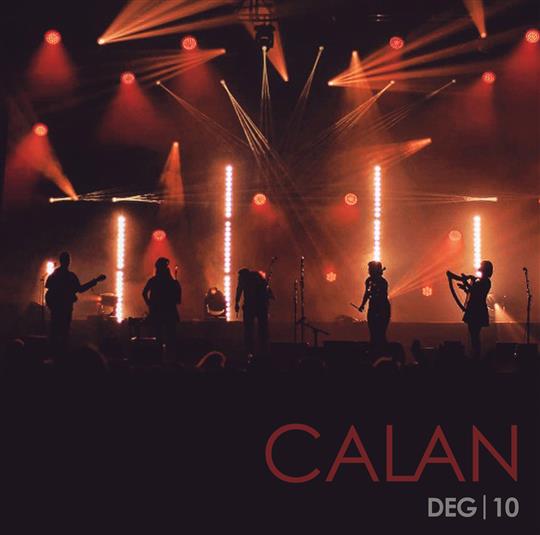 It’s over 10 years since Calan burst onto the UK folk scene with their invigorating interpretation of traditional Welsh music, their youngest member only 13 years old at the time. To mark the occasion, they have released DEG | 10, a compilation of their favourite recordings from the past 10 years, along with a few remixes, live recordings, and new tracks thrown in for good measure.

It’s hard not to like Calan, with their larger than life presentation and melodies that are alternately boisterous and beguiling. For newcomers to the band, DEG | 10 presents a decent overview of their career so far, and is a decent jumping off point from which to explore the rest of their work. Songs like the dreamy Jonah, the title track of their second album from 2012, or the manic Tale of Two Dragons from their most recent studio album, Solomon, give a good overview of their body of work.

For the Calan superfan, the first 11 tracks won’t be anything you’ve not heard before, but there’s also a short album’s worth of new(ish) content after that.

Firstly, there’s three new songs: Last Song, Iron Town and Peth Mawr Ydi Cariad. Last Song, as one might guess from the name, is a sweet, doleful ode to good times gone. Iron Town is a rousing, stomping retelling of the Chartist uprising - when workers in south Wales marched for the right to vote, and were met with gunfire. Finally, Peth Mawr Ydi Cariad is a spirited traditional Welsh tune. The three songs together are almost a condensed overview of the rest of Calan’s catalogue, and should please anyone desperate for a new release from the band, albeit briefly.

These are followed by two live tracks: Deio i Dywyn and Slip Jigs, from their 2008 debut Bling and 2013’s EP Giggly respectively. Other than the acoustics there’s not that much to distinguish them from the originals, but they remain great fun to hear nevertheless.

Finally, the album ends with a pair of remixes: Apparition and Synnwyr Solomon, both from Solomon. They add an electronic element to Calan’s music - and do a good enough job that it comes across as an element it would be interesting to see Calan explore more in the future.

Calan have had a great 10 years, and DEG | 10 is a prime showcase of why. Ultimately, it is largely what you might expect from a compilation, but the extras that are there are certainly very much appreciated.