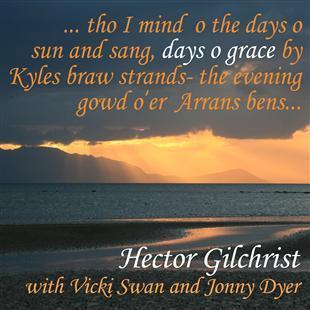 This release marks an impressive fifty years of folk singing for Hector Gilchrist. Hailing from the west of Scotland, though based in southern England for many years, the Scottish influence remains very strong both in the choice of songs and in the wonderfully atmospheric musical accompaniment.

Whilst in many ways this album of traditional and contemporary Scottish folk songs is typical of the genre, it is nevertheless done extremely well. Gilchrist chooses his material carefully and gives us fifteen songs that perfectly suit his gentle, relaxed style of vocal delivery.

He has also found himself some fine musicians to work with in Jonny Dyer and Vicki Swann, and in Moira Craig who provides some lovely additional vocals. The use of a wonderfully varied range of instrumentation throughout the album provides contrast and texture in a way that complements Gilchrist’s voice. Flute, pipes, guitar, accordion, double bass and nyckelharpa (a traditional Swedish keyed fiddle), as well as piano, can all be heard at different points on the album.

The Trysting Fayre at Falkirk, written by Bryan McNeil, opens the album and tells the story of the history and changing Fortunes of the Falkirk agricultural fayre. It is a strong opener with guitar and some beautiful flute-playing and nice harmony vocals. Other highlights include Glassmaker’s Hand written by Colum Sands, who is a regular visitor to Gilchrist’s local folk club in Thames Ditton and provided the inspiration for him to learn this song.

Just a Boy is another beautiful song and its piano accompaniment makes for a welcome and perhaps unexpected contrast mid-way through the album. Strong and Faithful, co-written by Gilchrist, moves at a more forceful pace than many of the other tracks on the album. But given its subject matter marking the loss and eventual return of clan lands at Strathlachlan the pace reflects the content of the lyrics perfectly, along with some atmospheric and evocative pipe playing. The rousing Scotland, originally written as a poem by Sir Alexander Grey and now etched into the walls of the Scottish Parliament, closes the album.

Those who enjoy Scottish traditional music will warm to Gilchrist’s soft and gentle style and sensitive treatment of some beautiful songs. And with some very fine music across fifteen tracks crammed on to this album, no-one who buys it will feel short-changed.