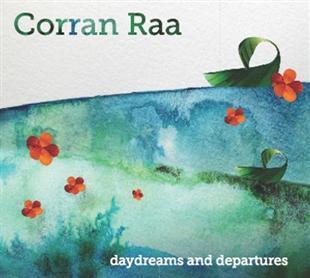 Corren Raa are a four-piece group based in Scotland who play mostly self-penned tunes composed in the traditional style, interspersed with some songs. The quartet consists of Jenny Smith and Janet Lees on fiddles, Robbie Leask on guitar and Kath Bruce on piano and vocals.

The sound of Daydreams and Departures is very unassuming, the songs and tunes included on the album don’t shout for attention but sneak up on the listener and impress with both their simplicity and integrity to traditional forms.

The three composers in the band, Bruce, Leask and Smith have a habit of being able to compose memorable tunes that could, in many cases be mistaken for traditional pieces. For example, the first track on the album consists of three distinctive, lively tunes that are played just enough to become buried in the listener’s subconscious but not so much that they outstay their welcome.

By contrast Seth’s/The Sands of Luskentyre are two gentle pieces composed by Bruce and Leask. The first is a ’Scottish Mazurka’ led by the two fiddles, whilst the second piece is piano-led and evokes the landscape of Luskentyre in Harris. The piano playing is especially beautiful here.

A more jazzy sound is evident on Special Agent Turberville which uses the piano almost as a ground bass whilst the fiddles take the main tune. It’s a jolly piece which sees the fiddles really stretching and giving the tune a full workout.

Included amongst all these wonderful new tunes are arrangements of three songs, one traditional and two by other composers. The most successful of the three is The Wild Flowers by John Spillane. The song is sensitively sung by Kath Bruce who has a pleasant voice. It’s a pity that the vocals on this and the other two songs are, at times, somewhat indistinct and lost in the mix.

Overall, Daydreams and Departures, is a memorable album crafted with skill by four talented musicians who are, surely, going to make many new friends with music making as skilled and heartfelt as this.