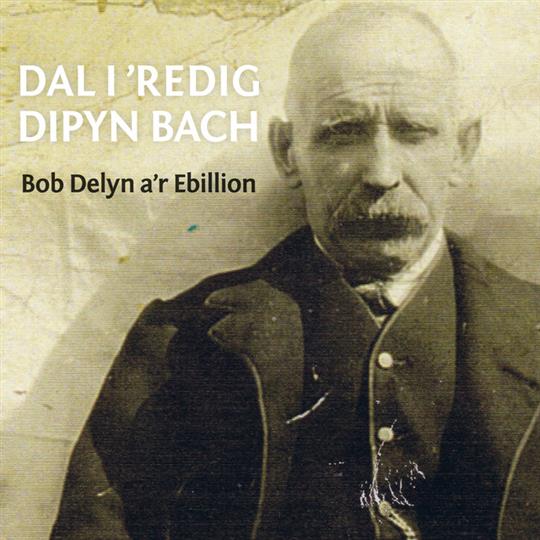 Credited for the Welsh folk revival of the 1990s, Bob Delyn a’r Ebillion are difficult to pigeonhole. Fronted by Twm Morys, the band’s musical style runs from folk-rock through to more traditional material whilst flirting with psychedelia and even hip-hop.

Dal i ’redig dipyn bach (still ploughing on a little bit) is Bob Delyn’s first album for fourteen years and is a mostly introspective work. Many of the songs have been written by Morys and talk of landscape, love and loss.

All but two of the songs are in in Welsh, the remaining pair are sung in the Breton language. The booklet provided with the album provides the texts but only a proportion of the pieces have a direct English translation. This is not a huge problem as the songs are so direct that the non-Welsh speaker can still feel the emotion under the lyrics.

Earlier Bob Delyn albums have been more rambunctious affairs but this set of material is mostly guitar led and low key in nature. This is an album that doesn’t need to shout to make its point.

Can John Williams, for example, celebrates the resurgence of the Welsh language whilst Gyda Mwyander (With Gentleness) laments the passing of a time when people were welcomed with joy in each other’s houses.

Morys isn’t afraid to show the roots of his song writing style. There’s a touch of Leonard Cohen in Rhydd (Free) with Morys’ musing on the freedom that will come when we cease to be. On the other hand Dweud has the ghost of the band’s namesake evoked in the harmonica accompaniment (played by Morys himself).

There’s plenty of catchy tunes and singalong choruses too. Both Cyfod dy Wely and Swn ar Gardyn Post get the toes tapping even when the lyrics themselves talk of melancholy matters.

Dal i ’redig dipyn bach is an album that will appeal to the more adventurous listener who isn’t afraid to step outside of their comfort zone. If they do, they will find an album full of melody and song that transcends language to touch the hearts and minds of those willing to listen to its message.