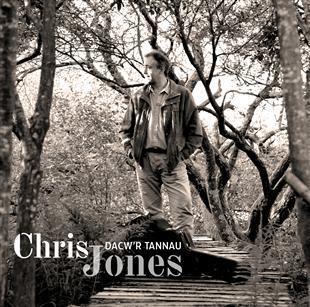 Singer-songwriter, folk balladeer and guitarist, Chris Jones began his career performing unaccompanied traditional Welsh songs, and that influence is very much in evidence on this album. For those who may find the idea of a complete album of Welsh language songs a little challenging, however, potential listeners should be reassured on two points. Firstly, in addition to his Welsh heritage, Jones also draws on wider Celtic and English traditions. We therefore get to hear songs from England, Ireland and the Scottish/Northumbrian border on this album, all sung in English. Secondly, the five Welsh language songs are delivered beautifully and evocatively with superb musicianship and lovely melodies. The extensive liner notes on the album help provide a real context for the songs, even for those with no understanding of the Welsh language.

Whether singing in English or in Welsh, Jones’ rich baritone vocals shine throughout the album and so, too, does his excellent guitar playing. His style has been compared to that of Bert Jansch and John Renbourn. There are definite similarities which, of course, means that the entire album is graced by some truly impressive and beautifully played acoustic guitar. On a number of tracks Alex Plows also plays whistle which perfectly matches the mood of the songs and provides a very sympathetic accompaniment to Jones’ singing and guitar playing.

Stand out songs on the album include Daew ’nghariad, a song about love and desire, which provides the perfect platform for Jones’ guitar playing and rich vocals as well as Plows’ beautiful whistle playing. The authoritative and calm delivery of the Child ballad, Sam Hall, is also another stand-out track. For its lovely bouzouki playing and catchy melody, the first track on the album, Hen Ferechetan, is another highlight.

Whether it is for those with a long-standing love of Welsh traditional music, or for those who have perhaps explored and enjoyed other Celtic traditions and are thinking of dipping their toe in the water when it comes to the music of Wales, this is a highly listenable album and a worthy addition to any collection.

Released on Gwymon on 29th September 2014