Stick In The Wheel - Cuts 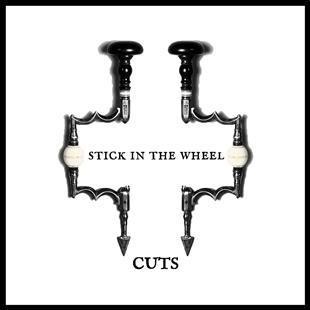 There’s something very honest and straightforward about Stick in the Wheel.

This no-nonsense group has what you might refer to as a ’grass roots’ approach to folk music. If they like a song they’ll perform it, without a hint of overproduction or promotional gimmicks, and their latest EP, Cuts, is no exception.

One thing which particularly stands out in this record is the cockney accent of Nic, the band’s vocalist. It’s refreshing to hear a regional accent being embraced in this way, and it really adds to the character of the music. This is particularly effective in tracks such as Champion At Keeping Them Rolling, as it enhances the storytelling and projects the idea of the protagonist of the tale being a Londoner. By not changing accents and putting on a front, it also ensures that the song comes right from the heart.

This particular EP features a range of traditional tunes collected from radio shows and recent compilations which have taken the band’s fancy. Originally, it was intended as a download-only release, but due to popular demand this was extended to a limited edition run of CDs as well.

Amongst the four short tracks, you can find a new version of folk favourite, The Cruel Ship’s Captain, along with what the band describe as ’possibly the fastest version of Barbara Allen’. The latter was recorded for the Radio 2 Folk Show’s Cecil Sharp Collection.

One thing which all four tracks have in common is great stories, and the third track (Marrabones) is a cracker, telling the tale of a woman’s quest to make her husband blind so she can be with her lover instead!

This is a band whose motives align very simply with the origins of folk music. They are perhaps summed up best in their own words: ’we play the music of our people. We sing in our own accents. We record in our kitchens and living rooms. This is our culture, our tradition.’

After all, isn’t that what folk’s all about?