Cora Smyth - Are We There Yet? 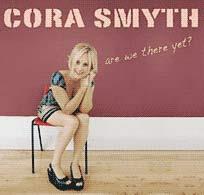 Cora Smyth comes from a strong family background of Irish music, growing up in County Mayo and has spent the last 10 years touring with various groups and shows. Her first album (a traditional Irish collection) was released with sister Breda in 2006.

I was intrigued by what I’d read about Cora Smyth from before putting on the CD - ’multi-dimensional backdrop of influences’ sounded promisingly exciting and varied. Sadly the CD itself doesn’t live up to these promises - the tunes are in general overshadowed by the backdrop beats rather than blending seamlessly with them. For a musician described as a fiddler and a whistler, these instruments are often lost in the mix with a lot to distract from them.

The Double O Jig starts off much as you might expect from an irish fiddle tune, with a surprisingly catchy rhythm, before launching into the main body of the tune, though slightly lacking enough variety to keep the listener’s interest.

The album ends with two gentle tunes, but overall I would be hard-pressed to call this anything but background music.