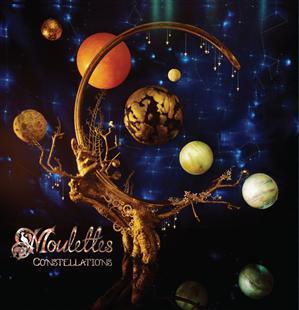 This is big. Now signed to Navigator records, the third album by Moulettes comes at the listener like an express train. The opening track sets out the band’s stall. Thumping drums, wailing synths and driving strings assault the senses. In the middle of it all is Hannah Miller’s voice almost drowned out by the joyful celebration of Glorious Year.

There’s a confidence and swagger to Constellations. Miller, lead singer, cellist and lyricist, has said that the band’s influences include Shostakovich, Miles Davis, Pentangle and Skrillex. Certainly the songs have a magpie quality to them, picking shiny musical ideas from all across the map and making them into something new.

The title track, for example, has a drum and bass feel with added glockenspiel which is wrapped around Miller’s staccato vocal line. It almost doesn’t matter that, at some points, it’s difficult to pick out what Miller is actually singing about.

There are guests on the album. Arthur Brown adds his unmistakable voice to Lady Vengeance (surely a reference to the 2005 Korean thriller of the same name?). This is, arguably, the outstanding track on the album blending trip-hop with prog rock and a dash of Divine Comedy bombast.

That such a huge song can be followed by an homage to 1920’s belle époque in The Night is Young shows the ambition of Miller and her band. This woozy waltz utilises a chamber orchestra to great effect as Miller declaims that ’the night is young there’s plenty of rum and life, after all, is for living.’

The orchestral feel continues on Elegy which makes haunting use of Becky and Rachel Unthank who each sing a verse of this spooky tale. The song, once again, builds up to a huge string climax before ending on a more mysterious note.

The Observatory is a fine piece of folk melodrama which echoes mid-period Kate Bush (think The Dreaming) with its use of both male and female background vocals and strong percussion.

The album closes with the trippy, eastern influenced, Keep it in the Memory. This is a difficult piece to grasp on first listen. It’s been described on the band’s website as ’death disco dub’ but it’ll not be heard on the dancefloor.

After nearly forty-five minutes of almost overwhelming soundscapes the listener might be forgiven for feeling both exhilarated and exhausted. Constellations is a big album in every way for Moulettes and represents a move away from folk into a more unclassifiable musical genre.

Perhaps we could just call it Moulettes music and leave it at that?

1. Glorious Year (Turn of the Centuries)
2. Constellations
3. Lady Vengeance
4. The Night is Young
5. Between Two Mirrors
6. So it Goes
7. Lady of the Midnight Sun
8. Elegy
9. The Observatory
10. Keep it as a Memory