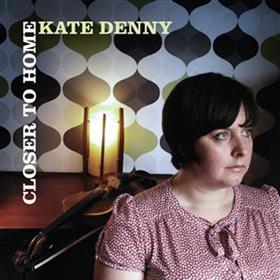 In the magically delicate Closer To Home Kate Denny of The Kittiwakes, embarks on a solo project. It is a promising set of original tracks whose inspirations range through family history, fairy tales, poetry, and local legends. Each one sets a scene and tells a story, each one takes you on a journey.

William and the Boat, is influenced by a story of William Wordsworth’s childhood. A young William runs away, gets in a boat, becomes frightened of the mountains in the dark, and returns home. The pacing guitar melody creates an atmosphere of tension which is eerie and mystical.

Getting By is a song which - despite the use of the Anglo-concertina that inevitably invokes memories of the good old days - reminds us of the hardship of life in the early 20th century. And considering the recession, is just as apt a way to describe the current economic climate, illustrating the way which traditional themes are applicable to every era and that human experience doesn’t really change - whether it is the 1900s or the 2000s we are all just ’getting by’.

The most moving songs are those which are based on family history; Billy, and Nellie Follett, both of which end in tragedy. Billy is about the First World War and Nellie Follett the retelling of Denny’s great-grandmother’s suicide. Billy is brilliantly moving, and the phrase ’nineteen years too soon, another poppy starts to bloom’ is an intensely lyrical description of the futility of war. Most of us have relatives who died in the First World War, and even though this song recounts her great uncle’s tragic early death, it is a universal experience and the tragedy is reflected in the sensitively mournful viola part. The next tale from the Follett family is Nellie Follett, and if you hadn’t read the sleeve notes for it you could be forgiven for thinking of it as probably an already established traditional folk track, as the themes of bastard children and death are ones which feature heavily in the folk song books.

The standout tracks are The Milk White Dove, and The Sisters of Jacob’s Hall. The Milk White Dove is based on a pretty gruesome fairy tale which includes all the really crucial elements of a good story; evil stepmothers, infanticide, cannibalism, magic, revenge and a happy ending - everything you could possibly want from a song! As well as the fantastic content of the track, it has a very catchy chorus which will have you singing along from the first listen.

The Sisters of Jacob’s Hall draws its influence from a folk tale from Denny’s home town of Great Wyrley about highway men, sisters, gold, large houses, murder and wandering ghosts. An impressively joyful song considering the sad end which the cunning sisters meet, and another great song whose content doesn’t seem exactly novel but does tell an interesting and compelling story. A future classic.

The strength of this album lies in the simple format which the music takes. Each track, except for the final joyful goodbye of Closer To Home, features guitar, an occasional concertina part, and Denny’s viola and voice. It’s really back to basics, there’s no musical fussiness. This approach gives each number an authentic sound, and even though each is an original creation it feels like you are re-visiting old favourites.

Closer To Home is a showcase of beautiful lyrics and evocative storytelling. The highly personal content serves as a reminder that there is a folk song hiding in everyone’s past, and the whole album sparkles with a secret magic which is never fully released but is always just beneath the surface.