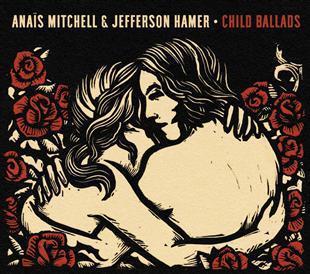 Deservedly lauded for her songwriting, Anaïs Mitchell here follows up her epic Hadestown and Young Man in America albums by turning to traditional song. Jefferson Hamer, who made an appearance on Mitchell’s last album, shares equal billing on a thoughtful, magical set entitled - appropriately - Child Ballads.

Her fans will have heard Mitchell’s superb live performances of Clyde Waters and her gripping, engaged delivery of the story is captured well here. Happily, the rest of the album is just as much of a pleasure to listen to.

Mitchell and Hamer prove unafraid of tackling some of the biggest ’hits’ in Child’s collection, and of giving them an US-style tint. The subtle-yet-rousing acoustic refrain of the upbeat Willie’s Lady, for example, brings out the American swing the tune always had, in a way that seems somehow both obvious and inventive.

Though gentle accordion, guitar and fiddle and bass accompany the songs, the duo’s close harmonies are the focus here, adding a rare warmth and intimacy to opener Willie of Winsbury. Mitchell and Hamer’s voices suit one another well, and while Mitchell tends to take the lead, Hamer proves his worth on a fluid, appealing version of Geordie and on the charming Riddles Wisely Expounded, sung as a duet.

Mitchell and Hamer cite Martin Carthy as an inspiration, and it’s easy to hear his influence. The stories of the songs are central, with tasteful, subtle arrangements allowing the tragicomic tale of Sir Patrick Spens, for example, to present itself. They’ve also followed Carthy’s dictum that “the only way to damage the songs is not to play them” - traditional tunes are given slight tweaks here and there to make them work: as it should be.

Perhaps Child Ballads’ closing song - Tam Lin - sums it up best. For some it might seem an intimidating, dense, epic challenge to record. But Mitchell and Hamer confidently pitch it just right: the guitars are breezy, the singing impassioned and the magic of the story shines through perfectly. It’s an uplifting end to a wholly superb album.