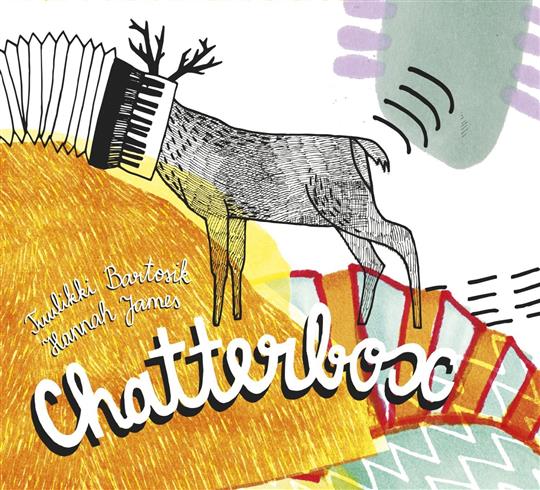 The name of Hannah James is likely to be almost instantly recognisable through her work with Kerfuffle, Sam Sweeney and Lady Maisery, although perhaps less so for her partner in crime on this project. It’s maybe not surprising, bearing in mind her interest in Scandinavian music, that she’s teamed up with fellow accordionist Tuulikki Bartosik whose Swedish/Estonian origins add a little exotic flavour to the partnership.

With Hannah commenting that “our styles and skills seem to complement each other and spark some very interesting and slightly wacky ideas!” it’s no surprise to learn that their sessions at Stiwdio Felin Fach in the Brecon Beacons overseen by Dylan Fowler led to them undertaking part of the recording in a local cave. The natural resonance and ambiance simply added a stunning atmosphere to several of the recordings which made the final album.

Prefixed Cave - , the four tracks literally drip, not only with the sound of water from the cave itself, but with a marvellous character and timbre. It begs the question of why such environments aren’t more widely used rather than the anonymity of the studio which, granted, aids the technical aspects yet lacks the atmosphere and interest generated by the more organic settings.

Of the underground tunes, Cave - Walk Of The Naughty Accordions and Cave - Playful aren’t much more than experimental improvisations, yet absorbing and fascinating in the way they evoke the images of the two players in the subterranean chambers. It’s the epitome of music being something which evokes an emotional response as opposed to something highbrow and elaborate which the listener has to think about.

Beyond the appeal and curio value of the Cave - recordings there’s still plenty to whet the appetite. Taking up the mantle of arranging traditional material from both their cultures together with several new compositions, their arrangement of the traditional Lonesome Woods is stark and foreboding; ’less is more’ never more evident than in this song. Add to that several traditional pieces of Scandinavian origin plus their own compositions to the mix, and Chatterbox is a broad and eclectic mix of music showcasing the accordion with occasional subtle embellishment from Dylan Fowler on guitar and Welsh drum.

For anyone who thought the accordion might be a boring instrument, take two of them, get yourself off to a cave or similarly distinct location and think again.

Recorded in Stiwdio Felin Fach in the Brecon Beacons and produced by Dylan Fowler.
Released on 25th May 2015 on Rootbeat Records.