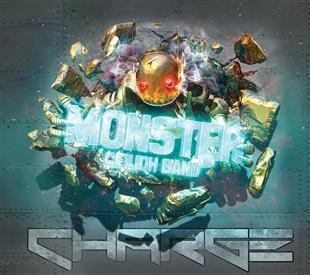 Monster Ceilidh Band are already up to their third studio album and are at a point where they have already exceeded expectations. It is very easy to see why, as they bring something quite unique to the folk world. Monster Ceilidh Band act as a strong bridge between traditional ideas of folk music and the more modern sounds of dance and techno.

This can sound like a bizarre style to try and adopt but the simple fact is that it works so well in its context. As the band name alone suggests, the focus is on music you can dance along with. To do this they simply one-up the use of folk instruments by merging them with sound effects, electric guitar tricks and other methods of really getting a beat pumping.

The tunes are primarily there for you to dance to and to get you full of energy. Tunes like G.Y.T.O. and Jack’s Back really do reflect the album name Charge. It is not only the computer sounds and electronic noises that make this band sound the way they do. Using the fiddle and accordion along with the electric guitar and sound effects really adds to the atmosphere of the overall sound. Particularly G.Y.T.O is a huge storm of electrical energy in which the fiddle and accordion slot in perfectly.

Not all of the tunes are set to get you pumped up though, as some such as Cosmos No.2 are very relaxing with the perfect blend of soft folk and some great sound mixing added in. Some of the first tunes, Vralkada and Super Mario Smack Down, are somewhere between the two extremes of energy and help blend the whole together.

Other tunes are more traditionally what you might expect from a ceilidh band, with Jack’s Back retaining the sound of the band but keeping more in touch with the traditional elements of the music.

This album is a great insight into the world of Monster Ceilidh Band, but as with much dance music, it can never quite achieve the feel of a live performance.