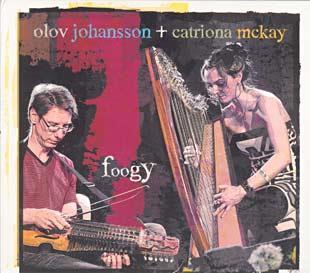 An album featuring only instrumental tracks may not be my natural first choice, wedded as I am to lyrics but I was intrigued to hear how the combination of Scottish Harp and Nykelharpa would sound.

For those not familiar with the nykelharpa, it is somewhere in the fiddle family, but comes across sounding like a cross between a fiddle, a squeezebox, and at times some sort of wind instrument. A fabulous instrument I have only seen played a few times, so in effect this was my nykelharpa baptism.

I’m pleased to say that I come away from this album a fan of both the nykelharpa, and the tunes that Olov and Catriona have written and collected. The harp acts as a wonderful light counterpoint to the nykelharpa, which provides the meatier side of the tunes.

The tunes themselves are a mix of old and new, with an equal balance of Scottish and Scandinavian origins. ’1st Class to Glasgow’ opens the album with a driving tune, evoking the constant movement of a train, and demonstrating perfectly how the two instruments complement each other, and can play far more than the slower airs I was expecting. In fact, in many ways Foogy is a dance album, filled with waltzes, polskas and reels.

My favourite tracks are split between a mid-tempo waltz and (predictably from me) a pacy schottis. ’Byss-Calle Vals’ is a waltz that was played by one of Sweden’s most famous nykelharpa players of the 19th century. It has a beautiful rolling quality that reminds me of rain and waterfalls. Serene and exciting at the same time. In contrast ’Toker/Korro’ is a playful, bouncy piece, that never seems to stop for breath.

The nykelharpa has now placed itself firmly in my consciousness as an instrument I want to see played wherever possible, and that alone should prove a glowing recommendation for this accomplished album. I look forward to hearing more from this unusual partnership.