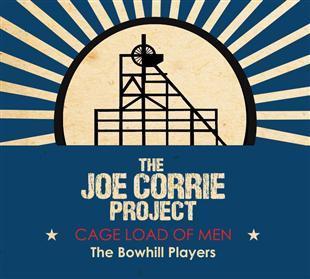 Cage Load of Men is a project in dedication to the playwright Joe Corrie, who also wrote poetry. William Hershaw, another poet and songwriter, got permission from Joe’s daughter to record these poems as folk and acoustic arrangements. He gathered himself a strong team including The Dandylions, Fiona Forbes, Davey Stewart and Jenn Knussen altogether becoming The Bowhill Players.

Each track of the project has been carefully adapted so that the music encompasses and facilitates the individual poem rather than working to fit one particular signature style as most musicians do.

This project is advertised as a ’celebration’ of Joe Corrie’s work, and the opening set Joe Corrie certainly starts us off that way, presenting us with a lively gospel styled track which cannot help but spread cheer. Likewise the finale of the album, which is a vocal reprise of this first track, closes the album as it began with title, theme and energy.

The lyrics of these two songs may seem a little nonsensical at first but the point of the song is to show how the plays of Joe Corrie gripped certain political events and expressed them. The line “I saw Joe Corrie...” at a certain place of political importance is referring to the impact of these plays.

The first poem used in the album is ’O Lassie Will Ye Gang?’ sung over the tune of Motherless Child to give it a bluegrass feel. The tune is about rural poverty, something associated with bluegrass, making this choice very fitting.

Similarly’ That’s the Way it Goes’ also makes use of a typical country style, although not quite bluegrass. This country style returns in ’To A Pitheid Lass’ which livens the pace of the album giving us a much quicker guitar strum and a similar fiddle that appears throughout the album.

’The Common Man/ Grace Before Food’ is also a song about poverty, using a gentle guitar and fiddle combination to back up the soft vocals in this set. This song is focusing more on working poverty, or the poverty of ’the common man’. It is stated that Corrie had previously worked as a miner, so can relate strongly to this, which comes across powerfully in the lyric,s which are perfectly matched with the tune to highlight his meaning.

The idea of poverty and the working class is spread through the entire album, tunes such as ’Cage Load of Men’ all follow this idea using different emphasises on fiddle, guitar and vocals to make each track link to the whole but still be unique in their own right.

Fiona Forbes sings us a very powerful song called ’I Took My Way to Chapel’ which, as well as talking in general about poverty, focuses on the church and how ’religious’ people were not helping as much as they could have. Fiona’s soothing voice is backed by the flowing of a fiddle and gentle drips of a guitar.

We do get a more solemn feel in tracks such as The Pedlar which are not as fierce with message but give an excellent relaxing mood through the music. It is a positive that the same vocalist does not sing every track; in this tune it gets mixed up, introducing a male voice as opposed to the previous female vocals.

In contrast to the way most of the album is performed, we do get some tracks which are simply poems being read over music, rather than a poem adapted into lyrics.

’The Wind That Shakes the Barley’ gives us a break in the pattern of the album, using a very distinctive vocal set over a light clarsach pluck. This poem is less serious story and is written as a conversation, which is possibly much harder to adapt into a full song.

This style returns in ’The Hunter’s Bar’ which varies slightly by going into an instrumental clarsach solo after the lyrics. Similarly we get a purely vocal version of the poem ’It’s Fine Tae Keep in Wi the Gaffer’, sung by Davey Stewart.

There is one purely instrumental track on the album, ’Gala Day’. This seems a little out of place as it does not seem to be directly connected to Joe Corrie, but it is still a very pleasant addition to the album and really shows the fiddle talents of Sandy Forbes giving us a fast paced country jig.

This project has collected a lot of talent together and more importantly has utilised this talent perfectly to create a solid country album of mixed herbs. The tracks are similar enough to work with each other but varied enough to spice things up and keep us interested throughout.