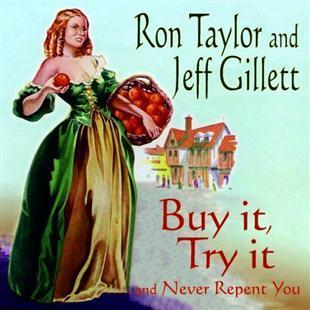 In this time of change, when it seems that the young are beginning to replace the more senior- you only have to look at the nominees for any of the awards this year for proof of this- it is refreshing to find that there is still a place for the oldies. This album is also evidence that there is a place for quality never mind the age.

Ron and Jeff are not big household names and it is doubtful they ever will be. Ron Taylor achieved some success in the Songwainers (surely time for their recordings to be heard again) and latterly in Regal Slip, whilst Jeff Gillett has had a more diverse musical career.

Ron has one of those voices which can bring life to any set of words whilst Jeff shows the value of true accompaniment, but also that he is a very talented player in his own right. He is able to raise the expectations of the listener through some high quality intros. Listening to the opening of some tracks, the scene is set for the vocals which follow - it can put the listener on the edge of their seat in anticipation.

All except one of the dozen or so tracks may be familiar but all seem fresh. It is different to pick out favourites, however there are excellent versions of Rambleaway, Young Johnson and Flash Lad to name just a few.

Mention must be made of some emotive fiddle playing by Becky Dellow, whilst the cello of Gill Redmond, especially on “Banks of Green Willow, is to die for.

The production, in the hands of Doug Bailey, is excellent, bringing the vocal to the fore but also making sure all the various layers of instrumentation are clear and defined. There is an informative booklet with Buy it, Try it but it is hard to see the relevance of the album art work to the content of the songs.

It is doubtful if Ron Taylor and Jeff Gillett will ever find themselves nominated for awards in those end of year ceremonies but Ron’s voice is up there with the best. There is no doubt that Ron and Jeff have produced an album which holds up alongside many around at the moment.

Released on WildGoose in 2013.