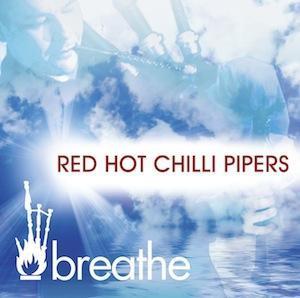 The Red Hot Chilli Pipers formed in 2002, with a mission to bring the energy and passion of ’Bagrock’ to the world. Breathe is their fourth album and certainly lives up to the billing.

It’s rare to find an album that is such a huge amount of fun, bursting with inventiveness and energy. The Chilli Pipers have six bagpipers in all with a range of supporting musicians and no fewer than 20 artists credited on the album.

The covers on Breathe are brilliantly entertaining, particularly Cars and Coldplay’s Fix You, the latter in particular an unlikely choice for a folk cover but highly effective.

The standout track is Don’t Stop Believing, justifiably their most popular live performance, where the Chilli Pipers achieve the feat of making this famous song sound as if it were always meant to be played this way - who needs electric guitars anyway?

There are also mash ups of, amongst other things, the theme from the movie 28 Days Later (Eminem) with Gordon Duncan’s The Sleeping Tune and The Eurythmics Sweet Dreams with Sweet Strathspey. The second main component of the album is arrangements of traditional tunes (The Silver Spear) and new pieces such as Down to the Loch a’ Choire, all of them with top notch playing.

A thoroughly entertaining album, and not just for bagpipe aficionados!