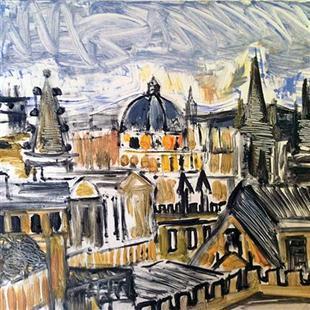 An echoey instruction to “put your hands together”, a raucous response, tinkling cymbals… and we’re off. Recorded live at the Bullingdon Arms, Oxford in May last year, Bonnie Bells of Oxford documents an energetic performance from folk-rockers Trembling Bells, alongside charismatic singer-songwriter Bonnie ’Prince’ Billy, otherwise known as Will Oldham.

The opening track sets the tone: the cymbal line turns into an intriguingly jazzy percussion line, and is joined by howling electric guitar and Doors-like keyboards. Oldham’s mantra “I found a joy of my own” speaks for itself.

The upbeat motif is carried into the second song, the soulful Ain’t Nothing Wrong, in which Oldham duets with Bells’ lead singer Lavinia Blackwall. Again, a funky Hammond organ-esque carries the song along, before an impassioned, borderline operatic sing-off.

Blackwall’s distinctive gale-force voice is undoubtedly powerful, and often high and tremulous -making her a perfect ’band’ singer. Oldham, on the other hand, has a naturally fragile-sounding tone. His crooning on Excursions Into Assonance, for example, is particularly affecting - but he can turn up the volume too, and makes an interesting, contrasting foil to Blackwall.

My Husband’s Got No Courage in Him, the show’s only traditional track, stands out from the rest of the set in more ways than one. Blackwall’s a cappella lead vocal is restrained, nicely paced and appropriately suggestive. Oldham’s romantically smutty So Everyone, played later in the set, makes an interesting counterpoint.

The band keeps the pace and energy up, starting one song as another finishes. There are elements of psychedelia, indie-pop (the delightful, bouncy Love Made an Outlaw of my Heart) and full-on rock (the guitar solo in Every Time I Close my Eyes is unashamedly epic). And while the playing is excellent all round, it’s not unfair to pick out drummer-songwriter Alex Neilson, whose thoughtful, often unpredictable percussion cuts through the thick live sound and keeps the songs fresh and interesting.

The final two tracks are particular highlights: You’re on the Bottom begins with a jaunty intro and a cheerful “there is not a God” refrain, before morphing - via some honky-tonk piano - into the musical equivalent of a drunken stagger through a western saloon. And the sweet finale - Love is a Velvet Noose - features one of the most arresting opening couplets you’re ever likely to hear, and gets better from there.

Bonnie Bells of Oxford is an absorbing document of two innovative, exciting forces coming together and complementing one another smartly. But it also sounds like a great night out - which is all you can ask of a live album, really.