Stick In The Wheel - Bones 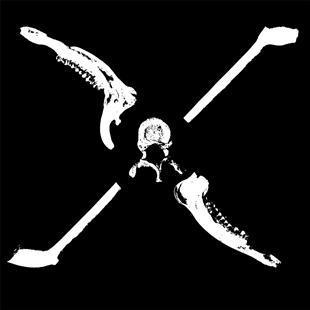 From the cover art to the seventeen minutes of music within, the new EP from Stick In The Wheel is as bare and as barren as its title. Be prepared for a dark ride.

With these four songs, plus an unlisted instrumental coda in the hauntingly atmospheric Ends, their third effort certainly accomplishes the band’s mission to epitomise their vision of folk music in a form which goes beyond a simple bland or empty nostalgia.

Of the four tunes, the traditional 300 year old Lancashire song Four Loom Weaver sets the theme and mood straight away and pulls no punches - a stark guitar accompaniment and a lyric of nowt to eat, worn out clothes and broken clogs - the desperation in the singing is quite unnerving as the tale of hardship and woe unravels.

Bedlam, the second of the traditional songs, is a more frenzied affair - as suggested by the title, showing all the torment and anguish of the Bethlem hospital from which it takes its name; it has a more harried and restless delivery, verging on the slightly manic, and reflecting the nature of the subject matter.

The ominous and bleak mood of the traditional material segues seamlessly into the two original tracks with their similarly bare arrangements and delivery. All The Things is built around an ominous repetitive death knell guitar which pervades the track, echoing the sort of fatalistic tale told in Dylan’s Hollis Brown. Once again, the emphasis is on an immediately raw and live sound and rhythmic dobro atmospherics which underpin the songs and provide a hypnotic soundtrack for the vocal to weave in and out.

The second original, Poor Old Man is a short and uncomplicated song in its rhyming and melody. Its sentiment again delivers an austere and desolate vision.

As Stick In The Wheel proudly state, “We play the music of our people. We sing in our own accents. We record in kitchens and living rooms. This is our culture, our tradition.” Bones is an uncomplicated and sobering piece of work where the feel of austerity in the music and vocal are perfectly matched.