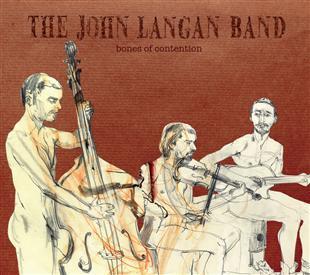 The ’interesting’ cover art on the album (naked and exposed drawings of the three musicians) instantly attracts one’s attention. An intelligent combination of various international sounds, from the sweetness of the violin to foot-stomping, one cannot sit still in a chair and ponder whilst listening to this album - they are sure to be a promising act live due to its easy engagement and body-wiggling rhythms.

Aquaplane, Thank You and Auld Jimmy utilise a running Spanish theme with a frequent fast and upbeat pace. The acapella choir of voices in Aquaplane is an instantly captivating introduction and gives one a significant reference to the Fleet Foxes. Just when one is becoming rather comfortable with the songs, they morph into a brief, dramatic ballad, before progressing on with the rapid Spanish theme.

Songs such as Midgets on Acid and Piano Miniature at times put the hairs on the back of one’s neck on end, before transforming into the most enchanting melodies.

Parts of many of the songs on Bones of Contention could be described as downright weird, and yet this is where the album shines: before the listener becomes too complacent, the song changes drastically.

Streets of Glasgow and Demons are ruled by the accordion. Once again these songs differ greatly from the last. Catchy and melodic, they entice the listener back in who may have started to feel a little alienated by some of the previous songs. They resemble the Victorian style entertained by bands such as Bellowhead.

This album challenges traditional folk styles familiar to all through unlikely yet successful means. The mix of world styles and instruments, with the quite literally open artwork, make this a controversial, unusual and at the very least fascinating album.

Without a doubt, the album will not pass through the folk scene unnoticed. It has a voice and will make itself heard. One thing is certain, no one can listen to this album and leave with indifference.