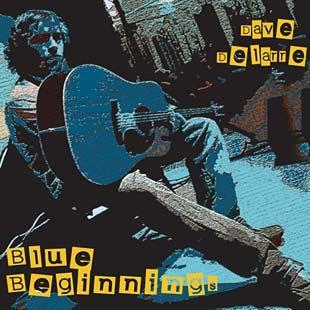 Dave Delarre’s first solo album is an instrumental affair, and a mere seven tracks long. Moving from the larger band sound of Mawkin it is also understandably a more paired-back and understated affair, with only some additional drums and electronics in places.

The focus of the middle segment of the album is on the break up of a long-term relationship, and this also permeates the title and explains the quotation from Hamlet inserted on the sleeve. Whilst four tracks are not directly related to this, somehow there is a sense of Blue Beginnings almost being a concept album. Having read the sleeve-notes it is impossible to escape the melancholy and hope present in equal measures.

There is a lot of variation to be found here in tempo and mood. Also on display are Dave’s excellent percussive guitar skills, using it as he does for percussion and melody simultaneously.

The tracks are predominantly self-penned, with the best of these being ’Dark Mornings and Bright Nights’. This tune closes the album and brings both a relaxed and positive end to proceedings.

In contrast, the other newly composed track that stands out is ’Four Years’, but for very different reasons. Dave describes the tune as "depressingly bizarre" in the sleeve notes, and I cannot disagree! It sounds quite experimental and perhaps a little bit prog. The endlessly repeating riff reminds me of 50s B-movies and this is overlaid with a number of production techniques. It really does feel like a soul is being laid bare.

The flip-side to this on the album has to be ’Cincinnati Flow Rag/Princess Royal’. These are paired together in an attempt to show how similar all folk really is. However, whilst it is somewhat successful the change between tunes is not as smooth as I might have expected from such a claim. Though in its defence, Princess Royal has long since been brainwashed into me, so I may not be able to listen to this one completely objectively.

Blue Beginnings marks an interesting departure for Dave Delarre and one that shows versatility and skill. However, the album is not entirely successful in showcasing his talents to the full - the skill and frenetic energy of live performances feels fairly absent on record - and I wait to hear his post-post-break up material with anticipation.