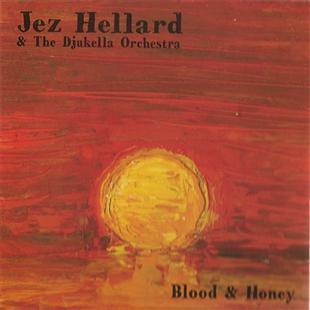 The sleeve notes tell us that that ’Djukella’ means mongrel in the Balkans, which is a very good description of their fantastic and widely-influenced music. The tracks are stylistically different whilst also being incredibly coherent. The variety of songs and musical arrangements is refreshing, the instrumental tracks break up the simple arrangements of voice and guitar which mark the vocal track,s providing a great mix of sounds.

In their collection of traditional tracks we are treated to interpretations of Saucy Sailor, and The Bonnie Black Hare. Being used to Maddy Prior’s haunting rendition of Saucy Sailor it was refreshing to hear a male performance which was less ghostly and more rugged. Bonnie Black Hare is also absolutely brilliant. Less rocky and sexually aggressive than the Steeleye Span version, Jez Hellard & the Djukella Orchestra are less innuendo-laden and far more persuasively and subtly seductive having stripped the sound back. It really is an absolute stormer and the stand out track of the album.

There are other vocal tracks: Mercenaries is thematically the antithesis of the message of Donovan’s Universal Soldier, and Remember The Mountain Bed, a mix of the Woodie Guthrie classic, is different again. Hellard’s tone is softer and more romantic, and the combination of guitar and his voice demonstrate the musical diversity that these guys are capable of whilst the beautiful lyrics remain the emphasis. Harvest Gypsies is the final vocal number and the last track of the album and is another high point.

The guitar and vocal tracks are great, but the instrumental tracks really add to the overall appeal of the record. Miner’s Picket Dance is a fairly delicate jazzy tune, but the miners which you imagine in listening to it are not the ones we imagine on the picket lines. It’s a far more cheerful experience than the title would suggest. The syncopated rhythms and instrumentation is dazzling and the bass line and solo keeps on going driving the track on.

Increasingly more seductive than that is the Atlas Tango which brings to mind several romantic fantasies of wine, candle-light and foreign sands - it seems musically uncomplicated which allows you to let your imagination wander as you are drawn into a trance-like state of wooziness. Catharsis is a tune which is mainly fiddled, and the upshot of that is a great driving rhythm, increased tension and a sound which is closer to English traditional than a lot of the more Balkan-like tracks on the album.

The mix of traditionally sourced songs and musical diversity makes for a great listening experience, none of which disappoints. It’s a great mongrel mix that sparkles with individuality and yet pays homage to great traditions. It is a rambunctious triumph of an album in which the energy never fades.