The Raven - Black Is The Colour 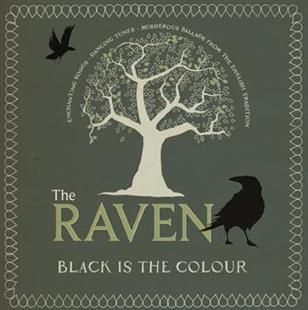 The Raven are London-based duo Carolyn Forbes and Stephen Moncrieff, whose first full-length album, Black is the Colour, shows them to be sensitive and interesting interpreters of traditional song - particularly its darker side.

The airy production of the solemn title track sets out the duo’s stall: Forbes calmly and delicately sings over guitarist Moncrieff’s sparing arrangement, creating an eerie, disquieting atmosphere. A superbly creepy She Moved Through The Fair shows off Forbes’ clear and cool voice to full effect, though an a cappella Ten Thousand Miles is less engrossing.

Moncrieff’s guitar plays rhythmic and canny on a shimmying, neatly arranged version of The Blacksmith, to which Forbes also adds gentle, complementary flute. It seems the more the pair work together, the better they are - Moncrieff’s earthy, distinctive tones balance out Forbes nicely on the accusatory The Snow it Melts the Soonest, while his leading performance on South Australia is raw and a little shouty - as it should be - allowing Forbes to give the song a sweeter depth.

Further harmonies are a feature of the album’s only original song, the romantic and light-hearted Greenwood. It’s written in a ’folky’ vernacular, but that it doesn’t stick out in such a well-chosen selection of traditional pieces is testament to the pair’s compositional skills.

The Raven are so well-suited to quiet, gothic settings, it’s rather a surprise to hear them playing tune sets. Nonetheless, Forbes is an excellent flautist, and Moncrieff adds some hearty percussive whacks to his playing on the enjoyable Cuckoo and Dribbles of Brandy sets.

With the exception of a few surprises, The Raven are a duo of subtlety and understatement. They allow the songs to do the talking, and for the most part play - refreshingly - without unnecessary ornamentation. This has the unfortunate side-effect of making one or two of the tracks feel a little anonymous, but for the most part this is a beguiling, thoughtful debut. It will be interesting to hear the duo develop from here.

1. Black is the Colour
2. The Cuckoo Tune Set
3. The Blacksmith
4. Ten Thousand Miles
5. She Moved Through the Fair
6. The Snow it Melts the Soonest
7. Dribbles of Brandy Tune Set
8. Greenwood
9. Rosebud in June
10. South Australia