Chris Ricketts - Between the Devil & the Deep Blue Sea 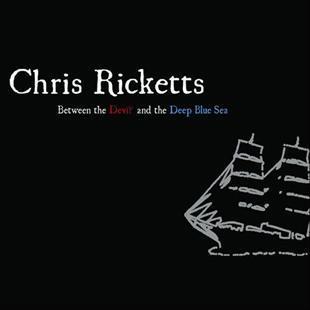 Sea Shanties are a popular part of the folk music world and keeping alive this old way of telling stories is no easy task. It takes a good quality singer to take sea shanties and make them commercial rather than simply tunes for people to hum.

Luckily Chris Ricketts has got a very distinctive and a strong voice that is capable of giving audiences great impressions of his songs. His 2013 album ’Between the Devil and the Deep Blue Sea’ is a collection of sea shanties that revives this genre of old to give it a new modern edge.

The collection of mostly original works to make the shanty style of music accessible for new audiences. They are arranged in a way that either makes them the kind of tunes that you can sing along to, such as with ’No Sad Farewells’ or they become more jazzed up so newer listeners would feel just at home when hearing the tunes. This is particularly prominent in tunes such as ’Plain Sailing’ where we get a great background fiddle alternating the foreground with Ricketts’ vocals along with good drumming and guitar strumming as a background sound.

Chris has made his tunes fast paced, foot tapping, the kind of music that again is aimed to help make the music accessible and fun rather than a remembrance of old depressing songs that often Shanties used to be (even though when you listen to the lyrics some are still pretty dreary!).

’Round the Corner Sally’ even sounds very American country in style from the fiddling to the chorus gospel style of backing vocals that you’d expect from a country barn dance.

We get this even more in ’Roller Bowler’ which even involves the chorus clapping. This tune is by far the most fun of the whole album, the backing vocals are perfectly timed to give you goose bumps and make you want to clap along despite being sat alone in your living room.

Some of the songs such as ’These Are The Songs’ stray away from the shanty-style of tune and spreads into a wider world of folk. With a gentle piano in the background and the sound of trickling water we get what is possibly the most relaxing song of the whole album. It was during this song that I first noticed that Ricketts does have a very soothing voice as well as a powerful one.

It is good to see someone who can use a powerful voice to be gentle, rather than being tempted to just belt out every song as proof of that strength.

’Press Gang’ gives us a possibly familiar name and story but is given a fresh lease of life by Rickets as he makes his signature musical sound the forefront of the tune. This album overall does a great job of bringing the sea shanty style back into popularity, Chris has worked hard on the album and it comes through strongly in each piece.

Released on the 5th September 2013 by AF Records