Stonecraft - Behind the Door 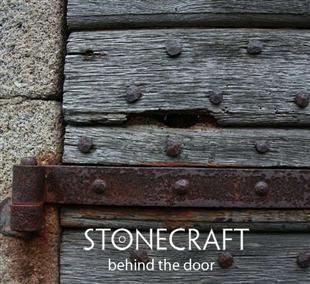 Stonecraft is a duo comprising Andy Morgan and Viil Hov Fjose, singer-songwriters influenced by Celtic and Norwegian traditions. The pair met while playing in a country covers band, and while on Behind the Door - their third album - there’s little evidence of any lingering influence from that particular genre, it’s clear Morgan and Fjose have bonded musically throughout their time playing together.

Fjose’s acoustic guitar tends to provide the backbone of a song, with multi-instrumentalist Morgan adding pleasing texture with cittern or bouzouki. His solo on Deadbeat comes out of nowhere, turning a fairly stately opener into something more frantic and exciting. And he repeats the trick regularly, adding a lovely, lilting outro to Breathe, for example.

Morgan and Fjose’s voices are both soft and calming, which rather suits the sonorous quality of the songs. But when they sing together it’s much more interesting - in fact you wish they’d do it more: Fjose’s backing harmonies on the neatly-paced Secret World really add a note of interest. Similarly, Simple Soul is another album highlight - the pair singing intensely to a driving backing, which is broken up by the introduction of a jittery, unsettling tune.

The Station has a folk-rock vibe, Fjose urging “take me to the river like we used to do before” to a driving, twangy backdrop. She also takes the lead on the album’s only traditional song, There’s My Love - otherwise known as Dacw ’Nghariad - which is driven along at a smart pace by an intricately, strongly picked tune.

Unfortunately, this serves to highlight some of the duo’s less exciting original compositions. Lyrically, Behind the Door is often frustratingly bland, and too many of the songs blend into one another. The pair are undoubtedly talented, and it’s an enjoyable listen, but a more confident, bold approach might serve them better next time around.